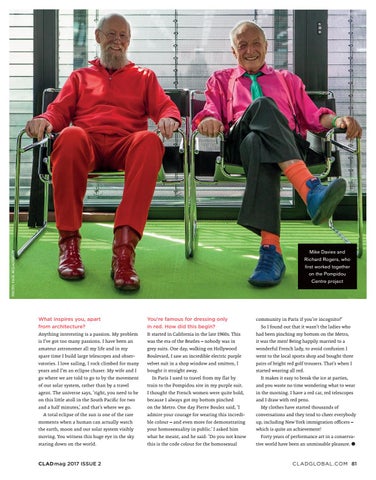 Mike Davies and Richard Rogers, who fi rst worked together on the Pompidou Centre project

What inspires you, apart from architecture? Anything interesting is a passion. My problem is I’ve got too many passions. I have been an amateur astronomer all my life and in my spare time I build large telescopes and observatories. I love sailing, I rock climbed for many years and I’m an eclipse chaser. My wife and I go where we are told to go to by the movement of our solar system, rather than by a travel agent. The universe says, ‘right, you need to be on this little atoll in the South Pacific for two and a half minutes,’ and that’s where we go. A total eclipse of the sun is one of the rare moments when a human can actually watch the earth, moon and our solar system visibly moving. You witness this huge eye in the sky staring down on the world.

You’re famous for dressing only in red. How did this begin? It started in California in the late 1960s. This was the era of the Beatles – nobody was in grey suits. One day, walking on Hollywood Boulevard, I saw an incredible electric purple velvet suit in a shop window and smitten, I bought it straight away. In Paris I used to travel from my flat by train to the Pompidou site in my purple suit. I thought the French women were quite bold, because I always got my bottom pinched on the Metro. One day Pierre Boulez said, ‘I admire your courage for wearing this incredible colour – and even more for demonstrating your homosexuality in public.’ I asked him what he meant, and he said: ‘Do you not know this is the code colour for the homosexual

community in Paris if you’re incognito?’ So I found out that it wasn’t the ladies who had been pinching my bottom on the Metro, it was the men! Being happily married to a wonderful French lady, to avoid confusion I went to the local sports shop and bought three pairs of bright red golf trousers. That’s when I started wearing all red. It makes it easy to break the ice at parties, and you waste no time wondering what to wear in the morning. I have a red car, red telescopes and I draw with red pens. My clothes have started thousands of conversations and they tend to cheer everybody up, including New York immigration officers – which is quite an achievement! Forty years of performance art in a conservative world have been an unmissable pleasure. ●