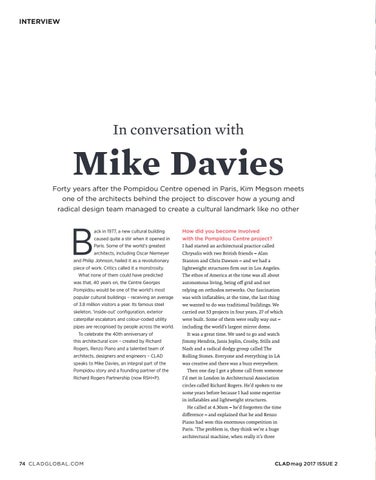 Forty years after the Pompidou Centre opened in Paris, Kim Megson meets one of the architects behind the project to discover how a young and radical design team managed to create a cultural landmark like no other

ack in 1977, a new cultural building caused quite a stir when it opened in Paris. Some of the world’s greatest architects, including Oscar Niemeyer

and Philip Johnson, hailed it as a revolutionary piece of work. Critics called it a monstrosity. What none of them could have predicted was that, 40 years on, the Centre Georges Pompidou would be one of the world’s most popular cultural buildings – receiving an average of 3.8 million visitors a year. Its famous steel skeleton, ‘inside-out’ configuration, exterior caterpillar escalators and colour-coded utility pipes are recognised by people across the world. To celebrate the 40th anniversary of this architectural icon – created by Richard Rogers, Renzo Piano and a talented team of architects, designers and engineers – CLAD speaks to Mike Davies, an integral part of the Pompidou story and a founding partner of the Richard Rogers Partnership (now RSH+P).

How did you become involved with the Pompidou Centre project? I had started an architectural practice called Chrysalis with two British friends – Alan Stanton and Chris Dawson – and we had a lightweight structures firm out in Los Angeles. The ethos of America at the time was all about autonomous living, being off grid and not relying on orthodox networks. Our fascination was with inflatables; at the time, the last thing we wanted to do was traditional buildings. We carried out 53 projects in four years, 27 of which were built. Some of them were really way out – including the world’s largest mirror dome. It was a great time. We used to go and watch Jimmy Hendrix, Janis Joplin, Crosby, Stills and Nash and a radical dodgy group called The Rolling Stones. Everyone and everything in LA was creative and there was a buzz everywhere. Then one day I got a phone call from someone I’d met in London in Architectural Association circles called Richard Rogers. He’d spoken to me some years before because I had some expertise in inflatables and lightweight structures. He called at 4.30am – he’d forgotten the time difference – and explained that he and Renzo Piano had won this enormous competition in Paris. ‘The problem is, they think we’re a huge architectural machine, when really it’s three