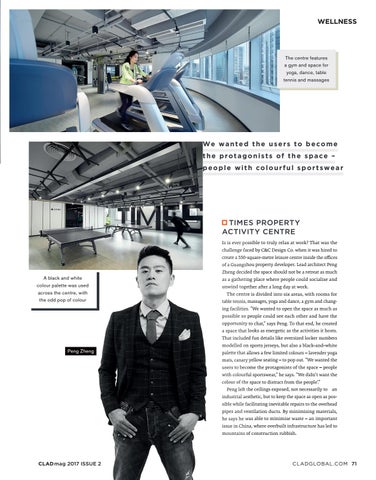 The centre features a gym and space for yoga, dance, table tennis and massages

A black and white colour palette was used across the centre, with the odd pop of colour

Is is ever possible to truly relax at work? That was the challenge faced by C&amp;C Design Co. when it was hired to create a 550-square-metre leisure centre inside the offices of a Guangzhou property developer. Lead architect Peng Zheng decided the space should not be a retreat as much as a gathering place where people could socialise and unwind together after a long day at work. The centre is divided into six areas, with rooms for table tennis, massages, yoga and dance, a gym and changing facilities. “We wanted to open the space as much as possible so people could see each other and have the opportunity to chat,” says Peng. To that end, he created a space that looks as energetic as the activities it hosts. That included fun details like oversized locker numbers modelled on sports jerseys, but also a black-and-white palette that allows a few limited colours – lavender yoga mats, canary yellow seating – to pop out. “We wanted the users to become the protagonists of the space – people with colourful sportswear,” he says. “We didn’t want the colour of the space to distract from the people’.” Peng left the ceilings exposed, not necessarily to an industrial aesthetic, but to keep the space as open as possible while facilitating inevitable repairs to the overhead pipes and ventilation ducts. By minimising materials, he says he was able to minimise waste – an important issue in China, where overbuilt infrastructure has led to mountains of construction rubbish.