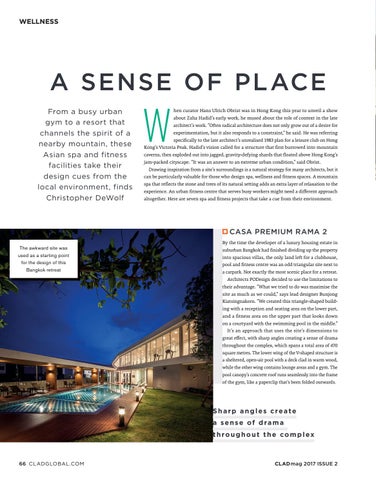 A SENSE OF PL ACE From a busy urban gym to a resort that channels the spirit of a nearby mountain, these Asian spa and fitness facilities take their design cues from the local environment, finds Christopher DeWolf

hen curator Hans Ulrich Obrist was in Hong Kong this year to unveil a show about Zaha Hadid’s early work, he mused about the role of context in the late architect’s work. “Often radical architecture does not only grow out of a desire for experimentation, but it also responds to a constraint,” he said. He was referring specifically to the late architect’s unrealised 1983 plan for a leisure club on Hong Kong’s Victoria Peak. Hadid’s vision called for a structure that first burrowed into mountain caverns, then exploded out into jagged, gravity-defying shards that floated above Hong Kong’s jam-packed cityscape. “It was an answer to an extreme urban condition,” said Obrist. Drawing inspiration from a site’s surroundings is a natural strategy for many architects, but it can be particularly valuable for those who design spa, wellness and fitness spaces. A mountain spa that reflects the stone and trees of its natural setting adds an extra layer of relaxation to the experience. An urban fitness centre that serves busy workers might need a different approach altogether. Here are seven spa and fitness projects that take a cue from their environment.

By the time the developer of a luxury housing estate in suburban Bangkok had finished dividing up the property into spacious villas, the only land left for a clubhouse, pool and fitness centre was an odd triangular site next to a carpark. Not exactly the most scenic place for a retreat. Architects PODesign decided to use the limitations to their advantage. “What we tried to do was maximise the site as much as we could,” says lead designer Bunjong Kiatsingnakorn. “We created this triangle-shaped building with a reception and seating area on the lower part, and a fitness area on the upper part that looks down on a courtyard with the swimming pool in the middle.” It’s an approach that uses the site’s dimensions to great effect, with sharp angles creating a sense of drama throughout the complex, which spans a total area of 470 square metres. The lower wing of the V-shaped structure is a sheltered, open-air pool with a deck clad in warm wood, while the other wing contains lounge areas and a gym. The pool canopy’s concrete roof runs seamlessly into the frame of the gym, like a paperclip that’s been folded outwards.