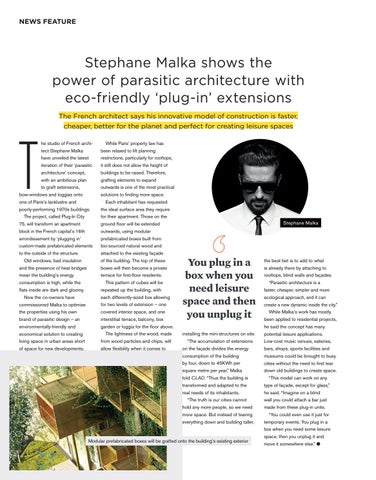 The French architect says his innovative model of construction is faster, cheaper, better for the planet and perfect for creating leisure spaces he studio of French archi-

While Paris’ property law has

been relaxed to lift planning

have unveiled the latest

iteration of their ‘parasitic

it still does not allow the height of

buildings to be raised. Therefore,

with an ambitious plan

outwards is one of the most practical

one of Paris’s lacklustre and

Each inhabitant has requested

the ideal surface area they require

for their apartment. Those on the

75, will transform an apartment

ground floor will be extended

block in the French capital’s 16th

arrondissement by ‘plugging in’

to the outside of the structure.

attached to the existing façade

of the building. The top of these

and the presence of heat bridges

boxes will then become a private

consumption is high, while the flats inside are dark and gloomy. Now the co-owners have

This pattern of cubes will be repeated up the building, with each differently-sized box allowing

for two levels of extension – one

the properties using his own

covered interior space, and one

brand of parasitic design – an

garden or loggia for the floor above.

The lightness of the wood, made

from wood particles and chips, will

of space for new developments.

allow flexibility when it comes to

the best bet is to add to what is already there by attaching to rooftops, blind walls and façades. “Parasitic architecture is a faster, cheaper, simpler and more ecological approach, and it can create a new dynamic inside the city.” While Malka’s work has mostly been applied to residential projects, he said the concept has many

installing the mini-structures on site. “The accumulation of extensions

on the façade divides the energy

consumption of the building

museums could be brought to busy

cities without the need to first tear

down old buildings to create space.

told CLAD. “Thus the building is

“This model can work on any

transformed and adapted to the

type of façade, except for glass,”

real needs of its inhabitants.

he said. “Imagine on a blind

“The truth is our cities cannot

wall you could attach a bar just

hold any more people, so we need

made from these plug-in units.

more space. But instead of tearing everything down and building taller,

“You could even use it just for temporary events. You plug in a box when you need some leisure

space, then you unplug it and move it somewhere else.” l