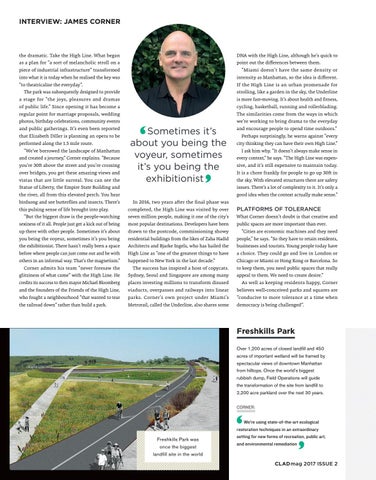 the dramatic. Take the High Line. What began as a plan for “a sort of melancholic stroll on a piece of industrial infrastructure” transformed into what it is today when he realised the key was “to theatricalise the everyday”. The park was subsequently designed to provide a stage for “the joys, pleasures and dramas of public life.” Since opening it has become a regular point for marriage proposals, wedding photos, birthday celebrations, community events and public gatherings. It’s even been reported that Elizabeth Diller is planning an opera to be performed along the 1.5 mile route. “We’ve borrowed the landscape of Manhattan and created a journey,” Corner explains. “Because you’re 30ft above the street and you’re crossing over bridges, you get these amazing views and vistas that are little surreal. You can see the Statue of Liberty, the Empire State Building and the river, all from this elevated perch. You hear birdsong and see butterflies and insects. There’s this pulsing sense of life brought into play. “But the biggest draw is the people-watching sexiness of it all. People just get a kick out of being up there with other people. Sometimes it’s about you being the voyeur, sometimes it’s you being the exhibitionist. There hasn’t really been a space before where people can just come out and be with others in an informal way. That’s the magnetism.” Corner admits his team “never foresaw the glitziness of what came” with the High Line. He credits its success to then mayor Michael Bloomberg and the founders of the Friends of the High Line, who fought a neighbourhood “that wanted to tear the railroad down” rather than build a park.

Sometimes it’s about you being the voyeur, sometimes it’s you being the exhibitionist In 2016, two years after the final phase was completed, the High Line was visited by over seven million people, making it one of the city’s most popular destinations. Developers have been drawn to the postcode, commissioning showy residential buildings from the likes of Zaha Hadid Architects and Bjarke Ingels, who has hailed the High Line as “one of the greatest things to have happened to New York in the last decade.” The success has inspired a host of copycats. Sydney, Seoul and Singapore are among many places investing millions to transform disused viaducts, overpasses and railways into linear parks. Corner’s own project under Miami’s Metrorail, called the Underline, also shares some

DNA with the High Line, although he’s quick to point out the differences between them. “Miami doesn’t have the same density or intensity as Manhattan, so the idea is different. If the High Line is an urban promenade for strolling, like a garden in the sky, the Underline is more fast-moving. It’s about health and fitness, cycling, basketball, running and rollerblading. The similarities come from the ways in which we’re working to bring drama to the everyday and encourage people to spend time outdoors.” Perhaps surprisingly, he warns against “every city thinking they can have their own High Line.” I ask him why. “It doesn’t always make sense in every context,” he says. “The High Line was expensive, and it’s still expensive to maintain today. It is a chore frankly for people to go up 30ft in the sky. With elevated structures there are safety issues. There’s a lot of complexity to it. It’s only a good idea when the context actually make sense.”

PLATFORMS OF TOLERANCE What Corner doesn’t doubt is that creative and public spaces are more important than ever. “Cities are economic machines and they need people,” he says. “So they have to retain residents, businesses and tourists. Young people today have a choice. They could go and live in London or Chicago or Miami or Hong Kong or Barcelona. So to keep them, you need public spaces that really appeal to them. We need to create desire.” As well as keeping residents happy, Corner believes well-conceived parks and squares are “conducive to more tolerance at a time when democracy is being challenged”.

Freshkills Park Over 1,200 acres of closed landfill and 450 acres of important wetland will be framed by spectacular views of downtown Manhattan from hilltops. Once the world’s biggest rubbish dump, Field Operations will guide the transformation of the site from landfill to 2,200 acre parkland over the next 30 years. CORNER: We’re using state-of-the-art ecological restoration techniques in an extraordinary Freshkills Park was once the biggest

landfi ll site in the world