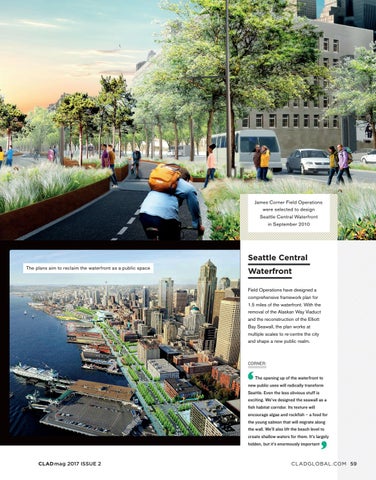 Waterfront Field Operations have designed a comprehensive framework plan for 1.5 miles of the waterfront. With the removal of the Alaskan Way Viaduct and the reconstruction of the Elliott Bay Seawall, the plan works at multiple scales to re-centre the city and shape a new public realm.

CORNER: The opening up of the waterfront to new public uses will radically transform Seattle. Even the less obvious stuff is exciting. We’ve designed the seawall as a fish habitat corridor. Its texture will encourage algae and rockfish – a food for the young salmon that will migrate along the wall. We’ll also lift the beach level to create shallow waters for them. It’s largely hidden, but it’s enormously important