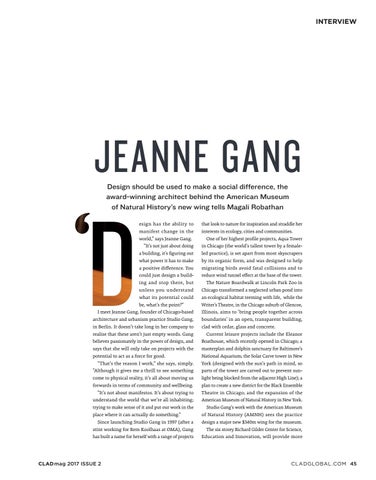 JEANNE GANG Design should be used to make a social difference, the award-winning architect behind the American Museum of Natural History’s new wing tells Magali Robathan esign has the ability to manifest change in the world,” says Jeanne Gang. “It’s not just about doing a building, it’s figuring out what power it has to make a positive difference. You could just design a building and stop there, but unless you understand what its potential could be, what’s the point?” I meet Jeanne Gang, founder of Chicago-based architecture and urbanism practice Studio Gang, in Berlin. It doesn’t take long in her company to realise that these aren’t just empty words. Gang believes passionately in the power of design, and says that she will only take on projects with the potential to act as a force for good. “That’s the reason I work,” she says, simply. “Although it gives me a thrill to see something come to physical reality, it’s all about moving us forwards in terms of community and wellbeing. “It’s not about manifestos. It’s about trying to understand the world that we’re all inhabiting; trying to make sense of it and put our work in the place where it can actually do something.” Since launching Studio Gang in 1997 (after a stint working for Rem Koolhaas at OMA), Gang has built a name for herself with a range of projects

that look to nature for inspiration and straddle her interests in ecology, cities and communities. One of her highest profile projects, Aqua Tower in Chicago (the world’s tallest tower by a femaleled practice), is set apart from most skyscrapers by its organic form, and was designed to help migrating birds avoid fatal collisions and to reduce wind tunnel effect at the base of the tower. The Nature Boardwalk at Lincoln Park Zoo in Chicago transformed a neglected urban pond into an ecological habitat teeming with life, while the Writer’s Theatre, in the Chicago suburb of Glencoe, Illinois, aims to ‘bring people together across boundaries’ in an open, transparent building, clad with cedar, glass and concrete. Current leisure projects include the Eleanor Boathouse, which recently opened in Chicago; a masterplan and dolphin sanctuary for Baltimore’s National Aquarium; the Solar Carve tower in New York (designed with the sun’s path in mind, so parts of the tower are carved out to prevent sunlight being blocked from the adjacent High Line); a plan to create a new district for the Black Ensemble Theatre in Chicago; and the expansion of the American Museum of Natural History in New York. Studio Gang’s work with the American Museum of Natural History (AMNH) sees the practice design a major new $340m wing for the museum. The six storey Richard Gilder Center for Science, Education and Innovation, will provide more