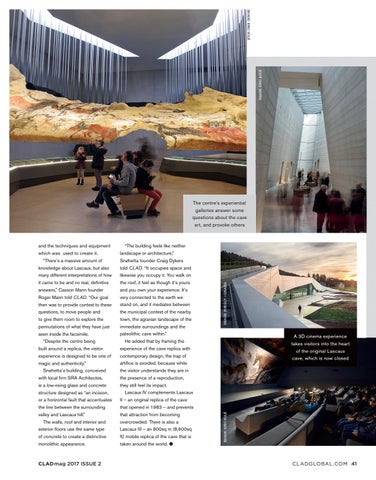 The centre’s experiential galleries answer some questions about the cave art, and provoke others

“There’s a massive amount of

knowledge about Lascaux, but also

told CLAD. “It occupies space and

many different interpretations of how

likewise you occupy it. You walk on

it came to be and no real, definitive

the roof, it feel as though it’s yours

and you own your experience. It’s

very connected to the earth we

then was to provide context to these

stand on, and it mediates between

questions, to move people and

the municipal context of the nearby

to give them room to explore the

town, the agrarian landscape of the

permutations of what they have just

immediate surroundings and the

seen inside the facsimile.

“Despite the centre being

experience of the cave replica with

experience is designed to be one of

contemporary design, the trap of

artifice is avoided, because while the presence of a reproduction,

is a low-rising glass and concrete

they still feel its impact. II – an original replica of the cave

the line between the surrounding

that attraction from becoming overcrowded. There is also a

exterior floors use the same type

of concrete to create a distinctive

ft) mobile replica of the cave that is

taken around the world. l

of the original Lascaux cave, which is now closed

or a horizontal fault that accentuates

The walls, roof and interior and

takes visitors into the heart

the visitor understands they are in

with local firm SRA Architectes, structure designed as “an incision,

He added that by framing the

built around a replica, the visitor

which was used to create it.

and the techniques and equipment