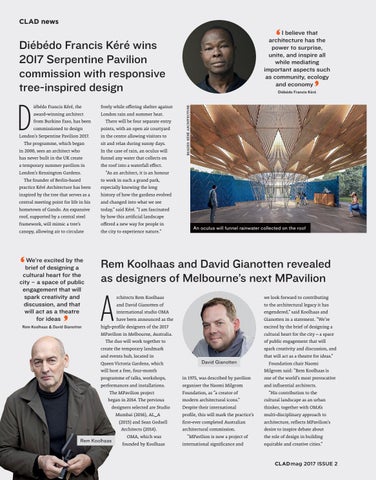 CLAD news I believe that architecture has the power to surprise, unite, and inspire all while mediating important aspects such as community, ecology and economy

from Burkino Faso, has been commissioned to design

There will be four separate entry points, with an open air courtyard

in the centre allowing visitors to

The programme, which began

sit and relax during sunny days.

In the case of rain, an oculus will

has never built in the UK create

funnel any water that collects on

a temporary summer pavilion in

the roof into a waterfall effect.

“As an architect, it is an honour to work in such a grand park,

practice Kéré Architecture has been

inspired by the tree that serves as a

history of how the gardens evolved

central meeting point for life in his

and changed into what we see

hometown of Gando. An expansive

today,&quot; said Kéré. “I am fascinated

roof, supported by a central steel

by how this artificial landscape

framework, will mimic a tree’s

offered a new way for people in

the city to experience nature.&quot;

We’re excited by the brief of designing a cultural heart for the city – a space of public engagement that will spark creativity and discussion, and that will act as a theatre for ideas

An oculus will funnel rainwater collected on the roof

we look forward to contributing

to the architectural legacy it has

have been announced as the

Gianotten in a statement. “We’re

high-profile designers of the 2017

excited by the brief of designing a

cultural heart for the city – a space

The duo will work together to

of public engagement that will

spark creativity and discussion, and

and events hub, located in Queen Victoria Gardens, which

that will act as a theatre for ideas.” David Gianotten

will host a free, four-month

in 1975, was described by pavilion

one of the world’s most provocative

Foundation, as “a creator of

cultural landscape as an urban

thinker, together with OMA’s

profile, this will mark the practice’s

desire to inspire debate about

OMA, which was founded by Koolhaas

“MPavilion is now a project of international significance and

“His contribution to the

the role of design in building equitable and creative cities.”