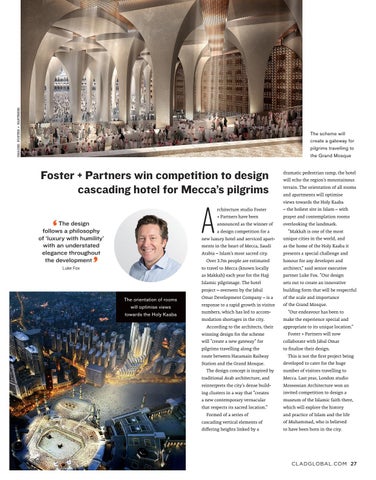 The orientation of rooms will optimise views towards the Holy Kaaba

terrain. The orientation of all rooms and apartments will optimise views towards the Holy Kaaba – the holiest site in Islam – with

announced as the winner of

a design competition for a

“Makkah is one of the most

unique cities in the world, and

ments in the heart of Mecca, Saudi

as the home of the Holy Kaaba it

presents a special challenge and honour for any developer and

to travel to Mecca (known locally

as Makkah) each year for the Hajj

sets out to create an innovative

project – overseen by the Jabal

building form that will be respectful

Omar Development Company – is a

of the scale and importance

response to a rapid growth in visitor

of the Grand Mosque.

numbers, which has led to accommodation shortages in the city. According to the architects, their

“Our endeavour has been to make the experience special and appropriate to its unique location.”

winning design for the scheme

will “create a new gateway” for

pilgrims travelling along the

to finalise their design.

route between Haramain Railway Station and the Grand Mosque. The design concept is inspired by

ing clusters in a way that “creates

invited competition to design a

museum of the Islamic faith there,

that respects its sacred location.”

which will explore the history

Formed of a series of

will echo the region’s mountainous

Over 3.7m people are estimated

and practice of Islam and the life

of Muhammad, who is believed

differing heights linked by a

to have been born in the city.