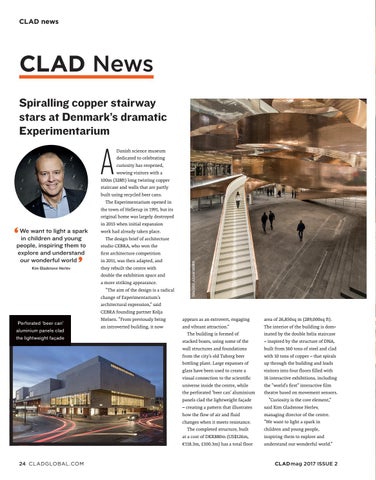 Danish science museum dedicated to celebrating curiosity has reopened, wowing visitors with a

100m (328ft) long twisting copper staircase and walls that are partly built using recycled beer cans. The Experimentarium opened in the town of Hellerup in 1991, but its original home was largely destroyed in 2015 when initial expansion

work had already taken place. The design brief of architecture studio CEBRA, who won the first architecture competition in 2011, was then adapted, and they rebuilt the centre with double the exhibition space and a more striking appearance. “The aim of the design is a radical change of Experimentarium’s

We want to light a spark in children and young people, inspiring them to explore and understand our wonderful world

Nielsen. “From previously being

appears as an extrovert, engaging

an introverted building, it now

The interior of the building is dom-

The building is formed of stacked boxes, using some of the

– inspired by the structure of DNA,

built from 160 tons of steel and clad

from the city’s old Tuborg beer

with 10 tons of copper – that spirals

up through the building and leads

glass have been used to create a

visitors into four floors filled with

visual connection to the scientific

universe inside the centre, while

the perforated ‘beer can’ aluminium

theatre based on movement sensors.

inated by the double helix staircase

“Curiosity is the core element,”

– creating a pattern that illustrates

how the flow of air and fluid

managing director of the centre.

changes when it meets resistance.

“We want to light a spark in

inspiring them to explore and