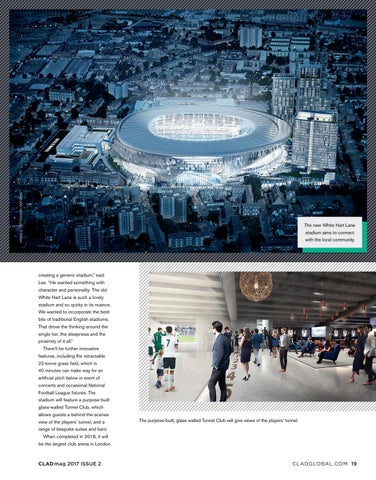 creating a generic stadium,” said Lee. “He wanted something with character and personality. The old White Hart Lane is such a lovely stadium and so quirky in its nuance. We wanted to incorporate the best bits of traditional English stadiums. That drove the thinking around the single tier, the steepness and the proximity of it all.” There’ll be further innovative features, including the retractable 22-tonne grass field, which in 40 minutes can make way for an artificial pitch below in event of concerts and occasional National Football League fixtures. The stadium will feature a purpose-built glass-walled Tunnel Club, which allows guests a behind-the-scenes view of the players’ tunnel, and a

The purpose-built, glass walled Tunnel Club will give views of the players’ tunnel

range of bespoke suites and bars. When completed in 2018, it will be the largest club arena in London.