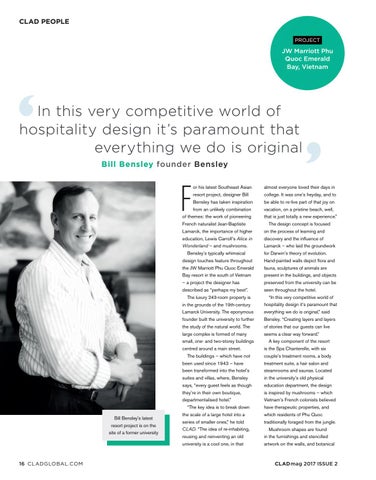 or his latest Southeast Asian

almost everyone loved their days in

college. It was one’s heyday, and to

be able to re-live part of that joy on

from an unlikely combination

vacation, on a pristine beach, well,

of themes: the work of pioneering French naturalist Jean-Baptiste

on the process of learning and

discovery and the influence of

Lamarck – who laid the groundwork Hand-painted walls depict flora and

fauna, sculptures of animals are

Bay resort in the south of Vietnam

present in the buildings, and objects

– a project the designer has

preserved from the university can be

described as “perhaps my best”.

seen throughout the hotel. hospitality design it’s paramount that

everything we do is original,” said

founder built the university to further

the study of the natural world. The

of stories that our guests can live

large complex is formed of many

centred around a main street. The buildings – which have not

A key component of the resort is the Spa Chanterelle, with six couple’s treatment rooms, a body

treatment suite, a hair salon and

been transformed into the hotel’s

suites and villas, where, Bensley

in the university’s old physical

says, “every guest feels as though

they’re in their own boutique,

is inspired by mushrooms – which

“The key idea is to break down

“In this very competitive world of

in the grounds of the 19th-century

small, one- and two-storey buildings

site of a former university

for Darwin’s theory of evolution.

The luxury 243-room property is

resort project is on the

The design concept is focused

Lamarck, the importance of higher

that is just totally a new experience.”

have therapeutic properties, and

the scale of a large hotel into a

which residents of Phu Quoc

series of smaller ones,” he told

traditionally foraged from the jungle.

CLAD. “The idea of re-inhabiting,

reusing and reinventing an old

in the furnishings and stencilled

university is a cool one, in that

artwork on the walls, and botanical