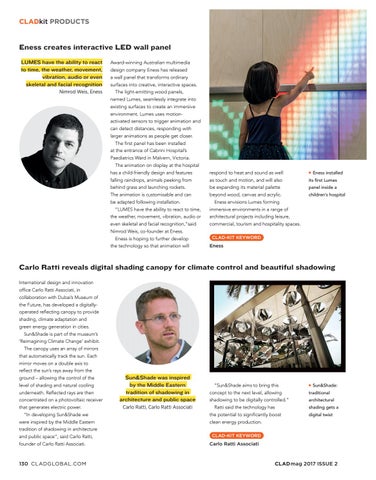 Award-winning Australian multimedia design company Eness has released a wall panel that transforms ordinary surfaces into creative, interactive spaces. The light-emitting wood panels, named Lumes, seamlessly integrate into existing surfaces to create an immersive environment. Lumes uses motionactivated sensors to trigger animation and can detect distances, responding with larger animations as people get closer. The ﬁrst panel has been installed at the entrance of Cabrini Hospital’s Paediatrics Ward in Malvern, Victoria. The animation on display at the hospital Eness installed

has a child-friendly design and features

respond to heat and sound as well

as touch and motion, and will also

behind grass and launching rockets.

be expanding its material palette

The animation is customisable and can

beyond wood, canvas and acrylic.

be adapted following installation. “LUMES have the ability to react to time,

Eness envisions Lumes forming immersive environments in a range of

the weather, movement, vibration, audio or

even skeletal and facial recognition,”said

Nimrod Weis, co-founder at Eness. Eness is hoping to further develop the technology so that animation will

Carlo Ratti reveals digital shading canopy for climate control and beautiful shadowing International design and innovation ofﬁce Carlo Ratti Associati, in collaboration with Dubai’s Museum of the Future, has developed a digitallyoperated reﬂecting canopy to provide shading, climate adaptation and green energy generation in cities. Sun&amp;Shade is part of the museum’s ‘Reimagining Climate Change’ exhibit. The canopy uses an array of mirrors that automatically track the sun. Each mirror moves on a double axis to reﬂect the sun’s rays away from the ground – allowing the control of the level of shading and natural cooling underneath. Reﬂected rays are then concentrated on a photovoltaic receiver that generates electric power. “In developing Sun&amp;Shade we were inspired by the Middle Eastern

Sun&amp;Shade was inspired by the Middle Eastern tradition of shadowing in architecture and public space Carlo Ratti, Carlo Ratti Associati

“Sun&amp;Shade aims to bring this

concept to the next level, allowing

shadowing to be digitally controlled.”

Ratti said the technology has the potential to signiﬁcantly boost

shading gets a digital twist