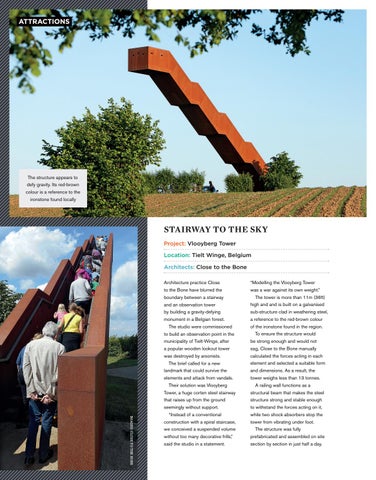 The structure appears to defy gravity. Its red-brown colour is a reference to the ironstone found locally

to the Bone have blurred the

was a war against its own weight.”

boundary between a stairway

and an observation tower

high and and is built on a galvanised

by building a gravity-defying

monument in a Belgian forest.

a reference to the red-brown colour

The studio were commissioned

of the ironstone found in the region.

to build an observation point in the

To ensure the structure would

be strong enough and would not

sag, Close to the Bone manually

was destroyed by arsonists.

calculated the forces acting in each

The brief called for a new

element and selected a suitable form

landmark that could survive the

and dimensions. As a result, the

elements and attack from vandals.

A railing wall functions as a

structural beam that makes the steel

that raises up from the ground

to withstand the forces acting on it,

IMAGES: CLOSE TO THE BONE

“Instead of a conventional construction with a spiral staircase, we conceived a suspended volume

while two shock absorbers stop the tower from vibrating under foot. The structure was fully

without too many decorative frills,”

prefabricated and assembled on site

said the studio in a statement.

section by section in just half a day.