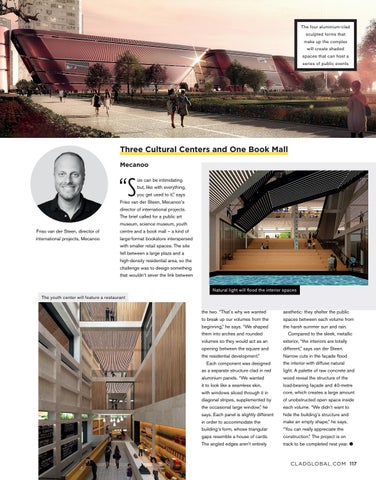 ize can be intimidating but, like with everything, you get used to it,” says

centre and a book mall – a kind of

large-format bookstore interspersed with smaller retail spaces. The site fell between a large plaza and a high-density residential area, so the challenge was to design something that wouldn’t sever the link between Natural light will fl ood the interior spaces

The youth center will feature a restaurant

the two. “That’s why we wanted

aesthetic: they shelter the public

to break up our volumes from the

spaces between each volume from

beginning,” he says. “We shaped

the harsh summer sun and rain.

them into arches and rounded

Compared to the sleek, metallic

volumes so they would act as an

exterior, “the interiors are totally

opening between the square and

Narrow cuts in the façade flood

Each component was designed

the interior with diffuse natural

as a separate structure clad in red

light. A palette of raw concrete and

wood reveal the structure of the

with windows sliced through it in

core, which creates a large amount

of unobstructed open space inside

the occasional large window,” he

each volume. “We didn’t want to

says. Each panel is slightly different

hide the building’s structure and

in order to accommodate the

make an empty shape,” he says.

“You can really appreciate the

gaps resemble a house of cards.

construction.” The project is on

track to be completed next year. ●