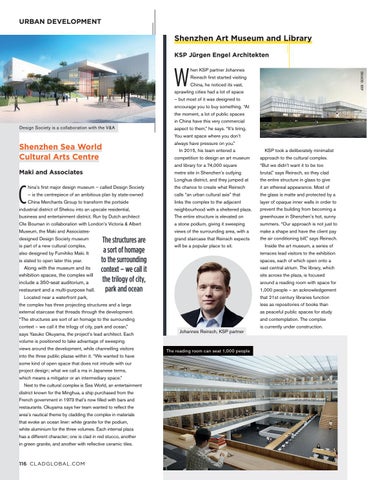 sprawling cities had a lot of space – but most of it was designed to encourage you to buy something. “At the moment, a lot of public spaces in China have this very commercial

Design Society is a collaboration with the V&amp;A

aspect to them,” he says. “It’s tiring. You want space where you don’t

always have pressure on you.” In 2015, his team entered a

competition to design an art museum

approach to the cultural complex.

“But we didn’t want it to be too

brutal,” says Reinsch, so they clad

Longhua district, and they jumped at

the entire structure in glass to give

the chance to create what Reinsch

it an ethereal appearance. Most of

– is the centrepiece of an ambitious plan by state-owned

calls “an urban cultural axis” that

the glass is matte and protected by a

links the complex to the adjacent

layer of opaque inner walls in order to

industrial district of Shekou into an upscale residential,

neighbourhood with a sheltered plaza.

prevent the building from becoming a

The entire structure is elevated on

a stone podium, giving it sweeping

summers. “Our approach is not just to

Museum, the Maki and Associates-

views of the surrounding area, with a

make a shape and have the client pay

designed Design Society museum is part of a new cultural complex, also designed by Fumihiko Maki. It is slated to open later this year.

Along with the museum and its exhibition spaces, the complex will include a 350-seat auditorium, a restaurant and a multi-purpose hall.

The structures are a sort of homage to the surrounding context – we call it the trilogy of city, park and ocean

will be a popular place to sit.

Inside the art museum, a series of terraces lead visitors to the exhibition spaces, each of which open onto a vast central atrium. The library, which sits across the plaza, is focused around a reading room with space for 1,000 people – an acknowledgement that 21st century libraries function

Located near a waterfront park, the complex has three projecting structures and a large

less as repositories of books than

external staircase that threads through the development.

as peaceful public spaces for study

“The structures are sort of an homage to the surrounding

and contemplation. The complex

context – we call it the trilogy of city, park and ocean,” says Yasuko Okuyama, the project’s lead architect. Each

volume is positioned to take advantage of sweeping views around the development, while channelling visitors into the three public plazas within it. “We wanted to have some kind of open space that does not intrude with our project design; what we call a ma in Japanese terms, which means a mitigator or an intermediary space.” Next to the cultural complex is Sea World, an entertainment district known for the Minghua, a ship purchased from the French government in 1973 that’s now filled with bars and restaurants. Okuyama says her team wanted to reflect the area’s nautical theme by cladding the complex in materials that evoke an ocean liner: white granite for the podium, white aluminium for the three volumes. Each internal plaza has a different character; one is clad in red stucco, another in green granite, and another with reflective ceramic tiles.

The reading room can seat 1,000 people

is currently under construction.