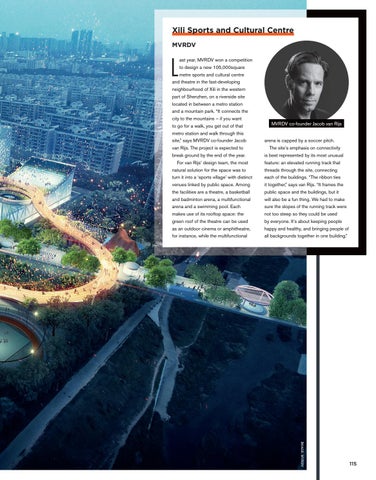 and theatre in the fast-developing neighbourhood of Xili in the western part of Shenzhen, on a riverside site located in between a metro station and a mountain park. “It connects the city to the mountains – if you want to go for a walk, you get out of that

arena is capped by a soccer pitch.

van Rijs. The project is expected to

The site’s emphasis on connectivity

break ground by the end of the year.

is best represented by its most unusual

For van Rijs’ design team, the most

feature: an elevated running track that

natural solution for the space was to

threads through the site, connecting

turn it into a ‘sports village’ with distinct

each of the buildings. “The ribbon ties

venues linked by public space. Among

it together,” says van Rijs. “It frames the

the facilities are a theatre, a basketball

public space and the buildings, but it

and badminton arena, a multifunctional

will also be a fun thing. We had to make

arena and a swimming pool. Each

sure the slopes of the running track were

makes use of its rooftop space: the

not too steep so they could be used

green roof of the theatre can be used

by everyone. It’s about keeping people

as an outdoor cinema or amphitheatre,

happy and healthy, and bringing people of

for instance, while the multifunctional

all backgrounds together in one building.”