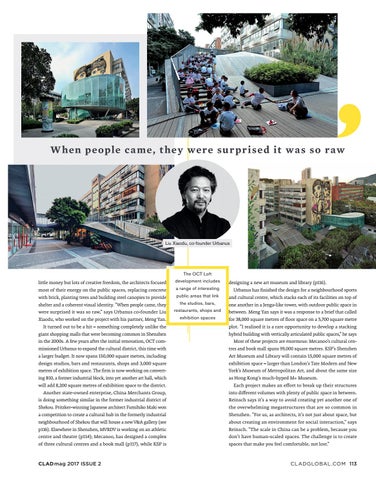 little money but lots of creative freedom, the architects focused most of their energy on the public spaces, replacing concrete with brick, planting trees and building steel canopies to provide shelter and a coherent visual identity. “When people came, they were surprised it was so raw,” says Urbanus co-founder Liu Xiaodu, who worked on the project with his partner, Meng Yan. It turned out to be a hit – something completely unlike the giant shopping malls that were becoming common in Shenzhen in the 2000s. A few years after the initial renovation, OCT commissioned Urbanus to expand the cultural district, this time with a larger budget. It now spans 150,000 square metres, including design studios, bars and restaurants, shops and 3,000 square metres of exhibition space. The firm is now working on converting B10, a former industrial block, into yet another art hall, which will add 8,200 square metres of exhibition space to the district. Another state-owned enterprise, China Merchants Group, is doing something similar in the former industrial district of Shekou. Pritzker-winning Japanese architect Fumihiko Maki won a competition to create a cultural hub in the formerly industrial neighbourhood of Shekou that will house a new V&amp;A gallery (see p116). Elsewhere in Shenzhen, MVRDV is working on an athletic centre and theatre (p114); Mecanoo, has designed a complex of three cultural centres and a book mall (p117), while KSP is

designing a new art museum and library (p116). Urbanus has finished the design for a neighbourhood sports and cultural centre, which stacks each of its facilities on top of one another in a Jenga-like tower, with outdoor public space in between. Meng Yan says it was a response to a brief that called for 38,000 square metres of floor space on a 5,700 square metre plot. “I realised it is a rare opportunity to develop a stacking hybrid building with vertically articulated public spaces,” he says Most of these projects are enormous: Mecanoo’s cultural centres and book mall spans 99,000 square metres. KSP’s Shenzhen Art Museum and Library will contain 15,000 square metres of exhibition space – larger than London’s Tate Modern and New York’s Museum of Metropolitan Art, and about the same size as Hong Kong’s much-hyped M+ Museum. Each project makes an effort to break up their structures into different volumes with plenty of public space in between. Reinsch says it’s a way to avoid creating yet another one of the overwhelming megastructures that are so common in Shenzhen. “For us, as architects, it’s not just about space, but about creating an environment for social interaction,” says Reinsch. “The scale in China can be a problem, because you don’t have human-scaled spaces. The challenge is to create spaces that make you feel comfortable, not lost.”