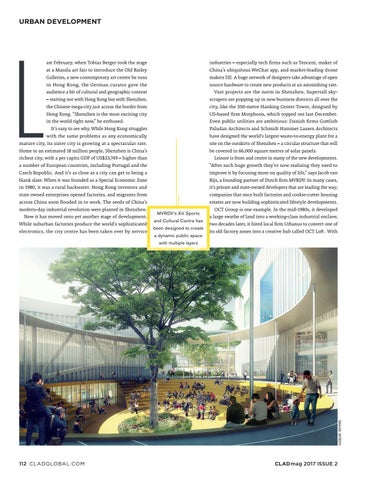 ast February, when Tobias Berger took the stage at a Manila art fair to introduce the Old Bailey Galleries, a new contemporary art centre he runs in Hong Kong, the German curator gave the audience a bit of cultural and geographic context – starting not with Hong Kong but with Shenzhen, the Chinese mega-city just across the border from Hong Kong. “Shenzhen is the most exciting city in the world right now,” he enthused. It’s easy to see why. While Hong Kong struggles with the same problems as any economically mature city, its sister city is growing at a spectacular rate. Home to an estimated 18 million people, Shenzhen is China’s richest city, with a per capita GDP of US$23,749 – higher than a number of European countries, including Portugal and the Czech Republic. And it’s as close as a city can get to being a blank slate. When it was founded as a Special Economic Zone in 1980, it was a rural backwater. Hong Kong investors and state owned enterprises opened factories, and migrants from across China soon flooded in to work. The seeds of China’s modern-day industrial revolution were planted in Shenzhen. Now it has moved onto yet another stage of development. While suburban factories produce the world’s sophisticated electronics, the city centre has been taken over by service

industries – especially tech firms such as Tencent, maker of China’s ubiquitous WeChat app, and market-leading drone makers DJI. A huge network of designers take advantage of open source hardware to create new products at an astonishing rate. Vast projects are the norm in Shenzhen. Supertall skyscrapers are popping up in new business districts all over the city, like the 350-metre Hanking Center Tower, designed by US-based firm Morphosis, which topped out last December. Even public utilities are ambitious: Danish firms Gottlieb Paludan Architects and Schmidt Hammer Lassen Architects have designed the world’s largest waste-to-energy plant for a site on the outskirts of Shenzhen – a circular structure that will be covered in 66,000 square metres of solar panels. Leisure is front and centre in many of the new developments. “After such huge growth they’re now realising they need to improve it by focusing more on quality of life,” says Jacob van Rijs, a founding partner of Dutch firm MVRDV. In many cases, it’s private and state-owned developers that are leading the way; companies that once built factories and cookie-cutter housing estates are now building sophisticated lifestyle developments. OCT Group is one example. In the mid-1980s, it developed a large swathe of land into a working-class industrial enclave; two decades later, it hired local firm Urbanus to convert one of its old factory zones into a creative hub called OCT Loft . With