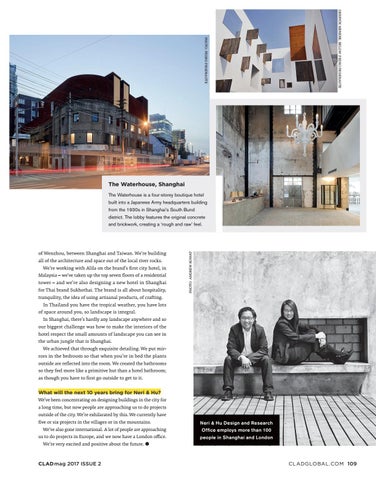 The Waterhouse, Shanghai The Waterhouse is a four-storey boutique hotel built into a Japanese Army headquarters building from the 1930s in Shanghai’s South Bund district. The lobby features the original concrete

of Wenzhou, between Shanghai and Taiwan. We’re building all of the architecture and space out of the local river rocks. We’re working with Alila on the brand’s first city hotel, in Malaysia – we’ve taken up the top seven floors of a residential tower – and we’re also designing a new hotel in Shanghai for Thai brand Sukhothai. The brand is all about hospitality, tranquility, the idea of using artisanal products, of crafting. In Thailand you have the tropical weather, you have lots of space around you, so landscape is integral. In Shanghai, there’s hardly any landscape anywhere and so our biggest challenge was how to make the interiors of the hotel respect the small amounts of landscape you can see in the urban jungle that is Shanghai. We achieved that through exquisite detailing. We put mirrors in the bedroom so that when you’re in bed the plants outside are reflected into the room. We created the bathrooms so they feel more like a primitive hut than a hotel bathroom; as though you have to first go outside to get to it.

What will the next 10 years bring for Neri &amp; Hu? We’ve been concentrating on designing buildings in the city for a long time, but now people are approaching us to do projects outside of the city. We’re exhilarated by this. We currently have five or six projects in the villages or in the mountains. We’ve also gone international. A lot of people are approaching us to do projects in Europe, and we now have a London office. We’re very excited and positive about the future. ●

and brickwork, creating a ‘rough and raw’ feel.