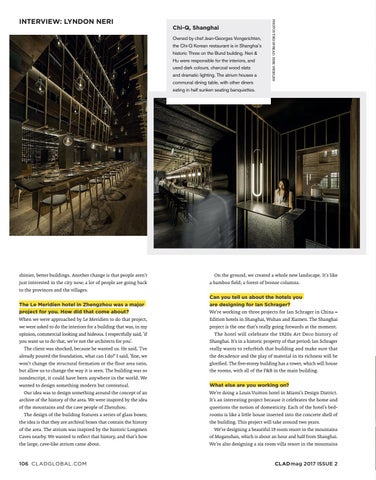 Chi-Q, Shanghai Owned by chef Jean-Georges Vongerichten, the Chi-Q Korean restaurant is in Shanghai’s historic Three on the Bund building. Neri &amp; Hu were responsible for the interiors, and used dark colours, charcoal wood slats and dramatic lighting. The atrium houses a communal dining table, with other diners

eating in half sunken seating banquiettes.

shinier, better buildings. Another change is that people aren’t just interested in the city now; a lot of people are going back to the provinces and the villages.

The Le Meridien hotel in Zhengzhou was a major project for you. How did that come about? When we were approached by Le Meridien to do that project, we were asked to do the interiors for a building that was, in my opinion, commercial looking and hideous. I respectfully said, ‘if you want us to do that, we’re not the architects for you’. The client was shocked, because he wanted us. He said, ‘I’ve already poured the foundation, what can I do?’ I said, ‘fine, we won’t change the structural formation or the floor area ratio, but allow us to change the way it is seen. The building was so nondescript, it could have been anywhere in the world. We wanted to design something modern but contextual. Our idea was to design something around the concept of an archive of the history of the area. We were inspired by the idea of the mountains and the cave people of Zhenzhou. The design of the building features a series of glass boxes; the idea is that they are archival boxes that contain the history of the area. The atrium was inspired by the historic Longmen Caves nearby. We wanted to reflect that history, and that’s how the large, cave-like atrium came about.

On the ground, we created a whole new landscape. It’s like a bamboo field; a forest of bronze columns.

Can you tell us about the hotels you are designing for Ian Schrager? We’re working on three projects for Ian Schrager in China – Edition hotels in Shanghai, Wuhan and Xiamen. The Shanghai project is the one that’s really going forwards at the moment. The hotel will celebrate the 1920s Art Deco history of Shanghai. It’s in a historic property of that period; Ian Schrager really wants to refurbish that building and make sure that the decadence and the play of material in its richness will be glorified. The five-storey building has a tower, which will house the rooms, with all of the F&amp;B in the main building. What else are you working on? We’re doing a Louis Vuitton hotel in Miami’s Design District. It’s an interesting project because it celebrates the home and questions the notion of domesticity. Each of the hotel’s bedrooms is like a little house inserted into the concrete shell of the building. This project will take around two years. We’re designing a beautiful 19 room resort in the mountains of Moganshan, which is about an hour and half from Shanghai. We’re also designing a six room villa resort in the mountains