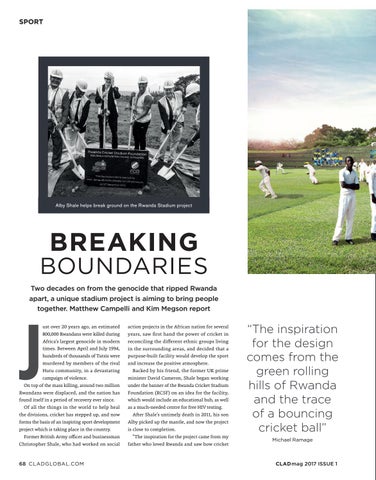 BOUNDARIES Two decades on from the genocide that ripped Rwanda apart, a unique stadium project is aiming to bring people together. Matthew Campelli and Kim Megson report

ust over 20 years ago, an estimated 800,000 Rwandans were killed during Africa’s largest genocide in modern times. Between April and July 1994, hundreds of thousands of Tutsis were murdered by members of the rival Hutu community, in a devastating campaign of violence. On top of the mass killing, around two million Rwandans were displaced, and the nation has found itself in a period of recovery ever since. Of all the things in the world to help heal the divisions, cricket has stepped up, and now forms the basis of an inspiring sport development project which is taking place in the country. Former British Army officer and businessman Christopher Shale, who had worked on social

action projects in the African nation for several years, saw first hand the power of cricket in reconciling the different ethnic groups living in the surrounding areas, and decided that a purpose-built facility would develop the sport and increase the positive atmosphere. Backed by his friend, the former UK prime minister David Cameron, Shale began working under the banner of the Rwanda Cricket Stadium Foundation (RCSF) on an idea for the facility, which would include an educational hub, as well as a much-needed centre for free HIV testing. After Shale’s untimely death in 2011, his son Alby picked up the mantle, and now the project is close to completion. “The inspiration for the project came from my father who loved Rwanda and saw how cricket