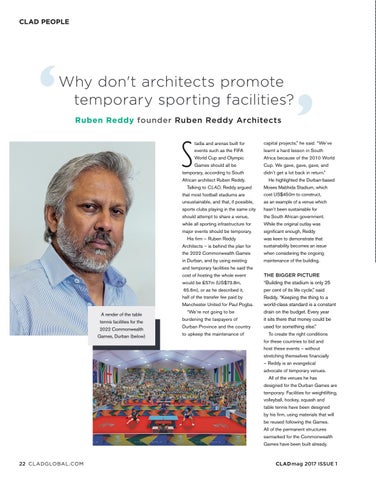 tadia and arenas built for

events such as the FIFA

learnt a hard lesson in South

Africa because of the 2010 World

Games should all be

didn’t get a lot back in return.” He highlighted the Durban-based Moses Mabhida Stadium, which

that most football stadiums are

unsustainable, and that, if possible,

as an example of a venue which

hasn’t been sustainable for

while all sporting infrastructure for

While the original outlay was

major events should be temporary.

was keen to demonstrate that

Architects – is behind the plan for

when considering the ongoing

in Durban, and by using existing

maintenance of the building.

and temporary facilities he said the cost of hosting the whole event would be £57m (US$73.8m, 65.6m), or as he described it, half of the transfer fee paid by Manchester United for Paul Pogba. A render of the table tennis facilities for the 2022 Commonwealth Games, Durban (below)

THE BIGGER PICTURE “Building the stadium is only 25 per cent of its life cycle,” said Reddy. “Keeping the thing to a world-class standard is a constant drain on the budget. Every year it sits there that money could be used for something else.” To create the right conditions for these countries to bid and host these events – without stretching themselves financially – Reddy is an evangelical advocate of temporary venues. All of the venues he has designed for the Durban Games are temporary. Facilities for weightlifting, volleyball, hockey, squash and table tennis have been designed by his firm, using materials that will be reused following the Games. All of the permanent structures earmarked for the Commonwealth Games have been built already.