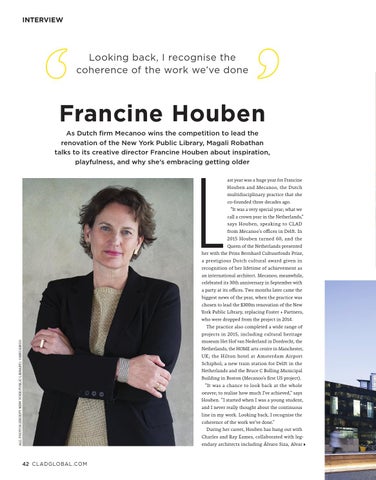 Looking back, I recognise the coherence of the work we’ve done

Francine Houben As Dutch firm Mecanoo wins the competition to lead the renovation of the New York Public Library, Magali Robathan talks to its creative director Francine Houben about inspiration, playfulness, and why she’s embracing getting older

ast year was a huge year for Francine Houben and Mecanoo, the Dutch multidisciplinary practice that she co-founded three decades ago. “It was a very special year; what we call a crown year in the Netherlands,” says Houben, speaking to CLAD from Mecanoo’s offices in Delft. In 2015 Houben turned 60, and the Queen of the Netherlands presented her with the Prins Bernhard Cultuurfonds Prize, a prestigious Dutch cultural award given in recognition of her lifetime of achievement as an international architect. Mecanoo, meanwhile, celebrated its 30th anniversary in September with a party at its offices. Two months later came the biggest news of the year, when the practice was chosen to lead the $300m renovation of the New York Public Library, replacing Foster + Partners, who were dropped from the project in 2014. The practice also completed a wide range of projects in 2015, including cultural heritage museum Het Hof van Nederland in Dordrecht, the Netherlands; the HOME arts centre in Manchester, UK; the Hilton hotel at Amsterdam Airport Schiphol; a new train station for Delft in the Netherlands and the Bruce C Bolling Municipal Building in Boston (Mecanoo’s first US project). “It was a chance to look back at the whole oeuvre; to realise how much I’ve achieved,” says Houben. “I started when I was a young student, and I never really thought about the continuous line in my work. Looking back, I recognise the coherence of the work we’ve done.” During her career, Houben has hung out with Charles and Ray Eames, collaborated with legendary architects including Álvaro Siza, Alvar