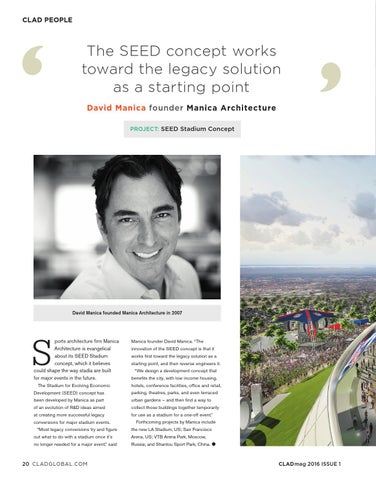 ports architecture firm Manica Architecture is evangelical about its SEED Stadium concept, which it believes could shape the way stadia are built for major events in the future. The Stadium for Evolving Economic

Manica founder David Manica. “The innovation of the SEED concept is that it works first toward the legacy solution as a starting point, and then reverse engineers it. “We design a development concept that benefits the city, with low income housing, hotels, conference facilities, office and retail, parking, theatres, parks, and even terraced

been developed by Manica as part

urban gardens – and then find a way to

of an evolution of R&amp;D ideas aimed

collect those buildings together temporarily

for use as a stadium for a one-off event.”

Forthcoming projects by Manica include the new LA Stadium, US; San Francisco

out what to do with a stadium once it’s

no longer needed for a major event,” said