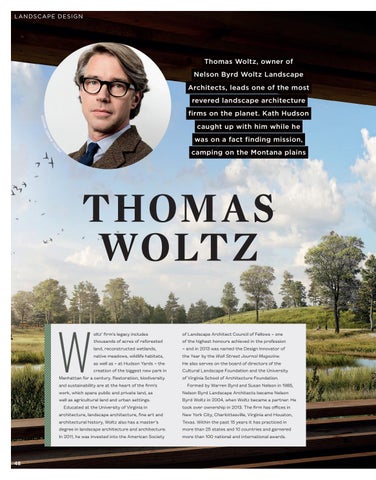 firms on the planet. Kath Hudson

caught up with him while he

was on a fact finding mission, camping on the Montana plains

of Landscape Architect Council of Fellows – one

thousands of acres of reforested

of the highest honours achieved in the profession

– and in 2013 was named the Design Innovator of

the Year by the Wall Street Journal Magazine.

as well as – at Hudson Yards – the

He also serves on the board of directors of the

creation of the biggest new park in

Cultural Landscape Foundation and the University

Manhattan for a century. Restoration, biodiversity and sustainability are at the heart of the firm’s

Formed by Warren Byrd and Susan Nelson in 1985,

work, which spans public and private land, as

Byrd Woltz in 2004, when Woltz became a partner. He

Educated at the University of Virginia in

of Virginia School of Architecture Foundation.

took over ownership in 2013. The firm has offices in

Texas. Within the past 15 years it has practiced in

more than 25 states and 10 countries and garnered

In 2011, he was invested into the American Society

more than 100 national and international awards.