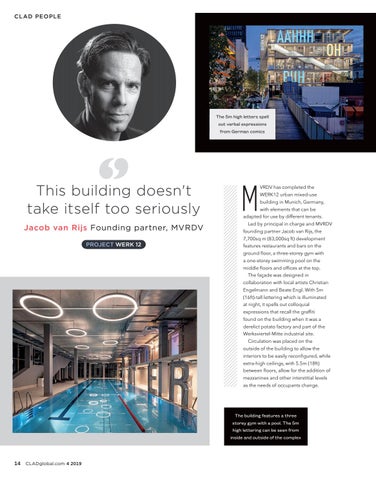 building in Munich, Germany, with elements that can be

adapted for use by different tenants.

Led by principal in charge and MVRDV

ground floor, a three-storey gym with a one-storey swimming pool on the

middle floors and offices at the top. The faĂ§ade was designed in

(16ft)-tall lettering which is illuminated at night, it spells out colloquial

expressions that recall the graffiti

found on the building when it was a

derelict potato factory and part of the Werksviertel-Mitte industrial site. Circulation was placed on the

outside of the building to allow the

interiors to be easily reconfigured, while extra-high ceilings, with 5.5m (18ft)

between floors, allow for the addition of mezzanines and other interstitial levels as the needs of occupants change.

The building features a three storey gym with a pool. The 5m high lettering can be seen from inside and outside of the complex