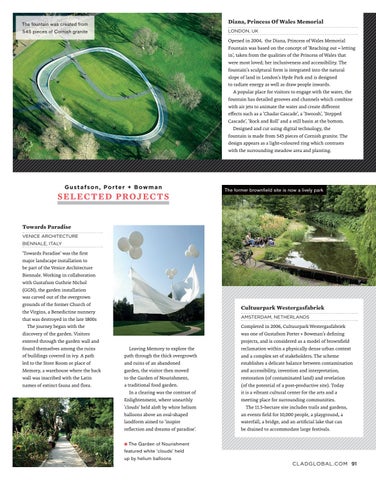 The fountain was created from

Opened in 2004, the Diana, Princess of Wales Memorial Fountain was based on the concept of ‘Reaching out – letting in’, taken from the qualities of the Princess of Wales that were most loved; her inclusiveness and accessibility. The fountain’s sculptural form is integrated into the natural slope of land in London’s Hyde Park and is designed to radiate energy as well as draw people inwards. A popular place for visitors to engage with the water, the fountain has detailed grooves and channels which combine with air jets to animate the water and create different effects such as a ‘Chadar Cascade’, a ‘Swoosh’, ‘Stepped Cascade’, ‘Rock and Roll’ and a still basin at the bottom. Designed and cut using digital technology, the fountain is made from 545 pieces of Cornish granite. The design appears as a light-coloured ring which contrasts with the surrounding meadow area and planting.

The former brownfi eld site is now a lively park

‘Towards Paradise’ was the first major landscape installation to be part of the Venice Architecture Biennale. Working in collaboration with Gustafson Guthrie Nichol (GGN), the garden installation was carved out of the overgrown grounds of the former Church of the Virgins, a Benedictine nunnery that was destroyed in the late 1800s The journey began with the discovery of the garden. Visitors entered through the garden wall and found themselves among the ruins of buildings covered in ivy. A path led to the Store Room or place of Memory, a warehouse where the back wall was inscribed with the Latin names of extinct fauna and flora.

Leaving Memory to explore the path through the thick overgrowth and ruins of an abandoned garden, the visitor then moved to the Garden of Nourishment, a traditional food garden. In a clearing was the contrast of Enlightenment, where unearthly ‘clouds’ held aloft by white helium balloons above an oval-shaped landform aimed to ‘inspire reflection and dreams of paradise’. ●

Completed in 2006, Cultuurpark Westergasfabriek was one of Gustafson Porter + Bowman’s defining projects, and is considered as a model of brownfield reclamation within a physically dense urban context and a complex set of stakeholders. The scheme establishes a delicate balance between contamination and accessibility, invention and interpretation, restoration (of contaminated land) and revelation (of the potential of a post-productive site). Today it is a vibrant cultural center for the arts and a meeting place for surrounding communities. The 11.5-hectare site includes trails and gardens, an events field for 10,000 people, a playground, a waterfall, a bridge, and an artificial lake that can be drained to accommodate large festivals.

The Garden of Nourishment