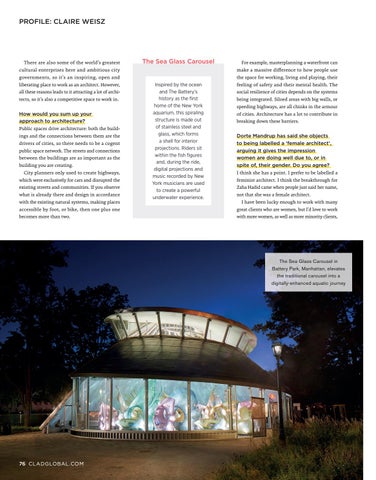 There are also some of the world’s greatest cultural enterprises here and ambitious city governments, so it’s an inspiring, open and liberating place to work as an architect. However, all these reasons leads to it attracting a lot of architects, so it’s also a competitive space to work in.

How would you sum up your approach to architecture? Public spaces drive architecture: both the buildings and the connections between them are the drivers of cities, so there needs to be a cogent public space network. The streets and connections between the buildings are as important as the building you are creating. City planners only used to create highways, which were exclusively for cars and disrupted the existing streets and communities. If you observe what is already there and design in accordance with the existing natural systems, making places accessible by foot, or bike, then one plus one becomes more than two.

Inspired by the ocean and The Battery’s history as the first home of the New York aquarium, this spiraling structure is made out of stainless steel and glass, which forms a shell for interior projections. Riders sit within the fish figures and, during the ride, digital projections and music recorded by New York musicians are used to create a powerful underwater experience.

For example, masterplanning a waterfront can make a massive difference to how people use the space for working, living and playing, their feeling of safety and their mental health. The social resilience of cities depends on the systems being integrated. Siloed areas with big walls, or speeding highways, are all chinks in the armour of cities. Architecture has a lot to contribute in breaking down these barriers.

Dorte Mandrup has said she objects to being labelled a ‘female architect’, arguing it gives the impression women are doing well due to, or in spite of, their gender. Do you agree? I think she has a point. I prefer to be labelled a feminist architect. I think the breakthrough for Zaha Hadid came when people just said her name, not that she was a female architect. I have been lucky enough to work with many great clients who are women, but I’d love to work with more women, as well as more minority clients,