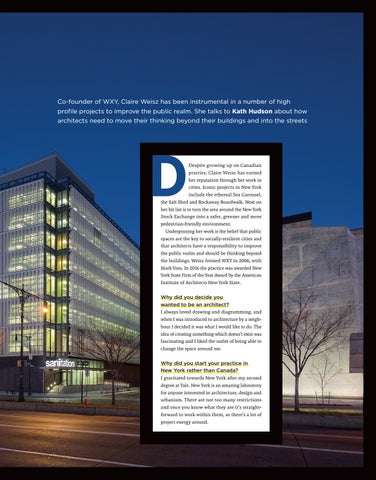 Co-founder of WXY, Claire Weisz has been instrumental in a number of high profile projects to improve the public realm. She talks to Kath Hudson about how architects need to move their thinking beyond their buildings and into the streets

Despite growing up on Canadian prairies, Claire Weisz has earned her reputation through her work in cities. Iconic projects in New York include the ethereal Sea Carousel, the Salt Shed and Rockaway Boardwalk. Next on her hit list is to turn the area around the New York Stock Exchange into a safer, greener and more pedestrian-friendly environment. Underpinning her work is the belief that public spaces are the key to socially-resilient cities and that architects have a responsibility to improve the public realm and should be thinking beyond the buildings. Weisz formed WXY in 2006, with Mark Yoes. In 2016 the practice was awarded New York State Firm of the Year Award by the American Institute of Architects New York State.

Why did you decide you wanted to be an architect? I always loved drawing and diagramming, and when I was introduced to architecture by a neighbour I decided it was what I would like to do. The idea of creating something which doesn’t exist was fascinating and I liked the outlet of being able to change the space around me. Why did you start your practice in New York rather than Canada? I gravitated towards New York after my second degree at Yale. New York is an amazing laboratory for anyone interested in architecture, design and urbanism. There are not too many restrictions and once you know what they are it’s straightforward to work within them, so there’s a lot of project energy around.