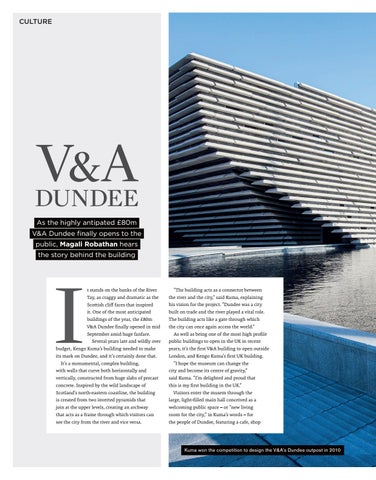 V &A DUNDEE As the highly antipated £80m V&A Dundee finally opens to the public, Magali Robathan hears the story behind the building

t stands on the banks of the River Tay, as craggy and dramatic as the Scottish cliff faces that inspired it. One of the most anticipated buildings of the year, the £80m V&A Dundee finally opened in mid September amid huge fanfare. Several years late and wildly over budget, Kengo Kuma’s building needed to make its mark on Dundee, and it’s certainly done that. It’s a monumental, complex building, with walls that curve both horizontally and vertically, constructed from huge slabs of precast concrete. Inspired by the wild landscape of Scotland’s north-eastern coastline, the building is created from two inverted pyramids that join at the upper levels, creating an archway that acts as a frame through which visitors can see the city from the river and vice versa.

“The building acts as a connector between the river and the city,” said Kuma, explaining his vision for the project. “Dundee was a city built on trade and the river played a vital role. The building acts like a gate through which the city can once again access the world.” As well as being one of the most high profile public buildings to open in the UK in recent years, it’s the first V&A building to open outside London, and Kengo Kuma’s first UK building. “I hope the museum can change the city and become its centre of gravity,” said Kuma. “I’m delighted and proud that this is my first building in the UK.” Visitors enter the musem through the large, light-filled main hall conceived as a welcoming public space – or “new living room for the city,” in Kuma’s words – for the people of Dundee, featuring a cafe, shop