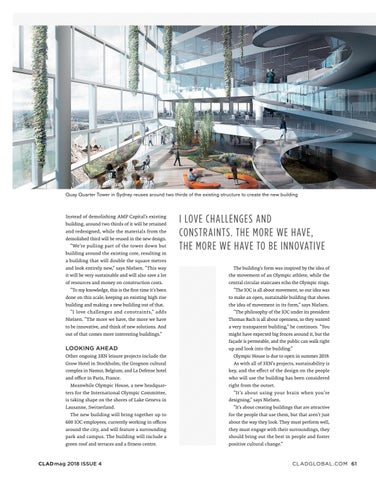 Instead of demolishing AMP Capital’s existing building, around two thirds of it will be retained and redesigned, while the materials from the demolished third will be reused in the new design. “We’re pulling part of the tower down but building around the existing core, resulting in a building that will double the square metres and look entirely new,” says Nielsen. “This way it will be very sustainable and will also save a lot of resources and money on construction costs. “To my knowledge, this is the first time it’s been done on this scale; keeping an existing high rise building and making a new building out of that. “I love challenges and constraints,” adds Nielsen. “The more we have, the more we have to be innovative, and think of new solutions. And out of that comes more interesting buildings.”

LOOKING AHEAD Other ongoing 3XN leisure projects include the Grow Hotel in Stockholm; the Grognon cultural complex in Namur, Belgium; and La Defense hotel and office in Paris, France. Meanwhile Olympic House, a new headquarters for the International Olympic Committee, is taking shape on the shores of Lake Geneva in Lausanne, Switzerland. The new building will bring together up to 600 IOC employees, currently working in offices around the city, and will feature a surrounding park and campus. The building will include a green roof and terraces and a fitness centre.

I LOVE CHALLENGES AND CONSTRAINTS. THE MORE WE HAVE, THE MORE WE HAVE TO BE INNOVATIVE The building’s form was inspired by the idea of the movement of an Olympic athlete, while the central circular staircases echo the Olympic rings. “The IOC is all about movement, so our idea was to make an open, sustainable building that shows the idea of movement in its form,” says Nielsen. “The philosophy of the IOC under its president Thomas Bach is all about openness, so they wanted a very transparent building,” he continues. “You might have expected big fences around it, but the façade is permeable, and the public can walk right up and look into the building.” Olympic House is due to open in summer 2019. As with all of 3XN’s projects, sustainability is key, and the effect of the design on the people who will use the building has been considered right from the outset. “It’s about using your brain when you’re designing,” says Nielsen. “It’s about creating buildings that are attractive for the people that use them, but that aren’t just about the way they look. They must perform well, they must engage with their surroundings, they should bring out the best in people and foster positive cultural change.”