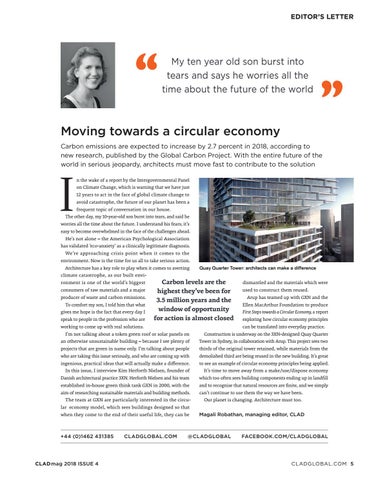 Moving towards a circular economy Carbon emissions are expected to increase by 2.7 percent in 2018, according to new research, published by the Global Carbon Project. With the entire future of the world in serious jeopardy, architects must move fast to contribute to the solution

n the wake of a report by the Intergovernmental Panel on Climate Change, which is warning that we have just 12 years to act in the face of global climate change to avoid catastrophe, the future of our planet has been a frequent topic of conversation in our house. The other day, my 10-year-old son burst into tears, and said he worries all the time about the future. I understand his fears; it’s easy to become overwhelmed in the face of the challenges ahead. He’s not alone – the American Psychological Association has validated ‘eco-anxiety’ as a clinically legitimate diagnosis. We’re approaching crisis point when it comes to the environment. Now is the time for us all to take serious action. Architecture has a key role to play when it comes to averting Quay Quarter Tower: architects can make a difference climate catastrophe, as our built enviCarbon levels are the ronment is one of the world’s biggest dismantled and the materials which were consumers of raw materials and a major used to construct them reused. highest they’ve been for producer of waste and carbon emissions. Arup has teamed up with GXN and the 3.5 million years and the To comfort my son, I told him that what Ellen MacArthur Foundation to produce window of opportunity gives me hope is the fact that every day I First Steps towards a Circular Economy, a report for action is almost closed exploring how circular economy principles speak to people in the profession who are working to come up with real solutions. can be translated into everyday practice. I’m not talking about a token green roof or solar panels on Construction is underway on the 3XN-designed Quay Quarter an otherwise unsustainable building – because I see plenty of Tower in Sydney, in collaboration with Arup. This project sees two projects that are green in name only. I’m talking about people thirds of the original tower retained, while materials from the who are taking this issue seriously, and who are coming up with demolished third are being reused in the new building. It’s great ingenious, practical ideas that will actually make a difference. to see an example of circular economy principles being applied. In this issue, I interview Kim Herforth Nielsen, founder of It’s time to move away from a make/use/dispose economy Danish architectural practice 3XN. Herforth Nielsen and his team which too often sees building components ending up in landfill established in-house green think tank GXN in 2000, with the and to recognise that natural resources are finite, and we simply aim of researching sustainable materials and building methods. can’t continue to use them the way we have been. Our planet is changing. Architecture must too. The team at GXN are particularly interested in the circular economy model, which sees buildings designed so that when they come to the end of their useful life, they can be Magali Robathan, managing editor, CLAD