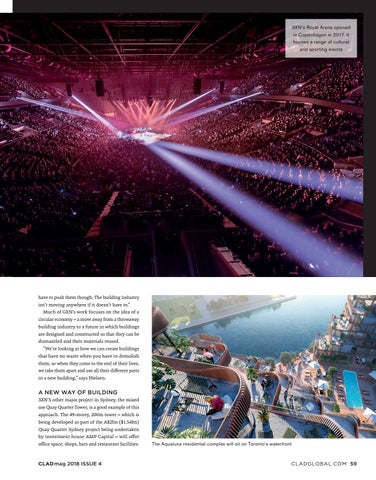 3XN’s Royal Arena opened in Copenhagen in 2017. It houses a range of cultural and sporting events

have to push them though. The building industry isn’t moving anywhere if it doesn’t have to.” Much of GXN’s work focuses on the idea of a circular economy – a move away from a throwaway building industry to a future in which buildings are designed and constructed so that they can be dismantled and their materials reused. “We’re looking at how we can create buildings that have no waste when you have to demolish them, so when they come to the end of their lives, we take them apart and use all their different parts in a new building,” says Nielsen.

A NEW WAY OF BUILDING 3XN’S other major project in Sydney, the mixed use Quay Quarter Tower, is a good example of this approach. The 49-storey, 200m tower – which is being developed as part of the A$2bn ($1.54bn) Quay Quarter Sydney project being undertaken by investment house AMP Capital – will offer office space, shops, bars and restaurant facilities.

The Aqualuna residential complex will sit on Toronto’s waterfront