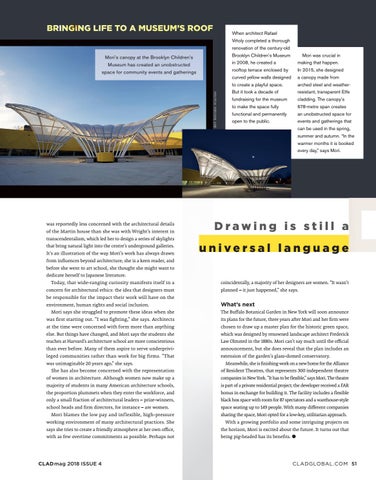 Mori was crucial in

a canopy made from

to create a playful space.

But it took a decade of

fundraising for the museum

to make the space fully

an unobstructed space for

open to the public.

events and gatherings that can be used in the spring, summer and autumn. “In the warmer months it is booked every day,” says Mori.

was reportedly less concerned with the architectural details of the Martin house than she was with Wright’s interest in transcendentalism, which led her to design a series of skylights that bring natural light into the centre’s underground galleries. It’s an illustration of the way Mori’s work has always drawn from influences beyond architecture; she is a keen reader, and before she went to art school, she thought she might want to dedicate herself to Japanese literature. Today, that wide-ranging curiosity manifests itself in a concern for architectural ethics: the idea that designers must be responsible for the impact their work will have on the environment, human rights and social inclusion. Mori says she struggled to promote these ideas when she was first starting out. “I was fighting,” she says. Architects at the time were concerned with form more than anything else. But things have changed, and Mori says the students she teaches at Harvard’s architecture school are more conscientious than ever before. Many of them aspire to serve underprivileged communities rather than work for big firms. “That was unimaginable 20 years ago,” she says. She has also become concerned with the representation of women in architecture. Although women now make up a majority of students in many American architecture schools, the proportion plummets when they enter the workforce, and only a small fraction of architectural leaders – prize-winners, school heads and firm directors, for instance – are women. Mori blames the low pay and inflexible, high-pressure working environment of many architectural practices. She says she tries to create a friendly atmosphere at her own office, with as few overtime commitments as possible. Perhaps not

Drawing is still a universal language coincidentally, a majority of her designers are women. “It wasn’t planned – it just happened,” she says.

What’s next The Buffalo Botanical Garden in New York will soon announce its plans for the future, three years after Mori and her firm were chosen to draw up a master plan for the historic green space, which was designed by renowned landscape architect Frederick Law Olmsted in the 1880s. Mori can’t say much until the official announcement, but she does reveal that the plan includes an extension of the garden’s glass-domed conservatory. Meanwhile, she is finishing work on a new home for the Alliance of Resident Theatres, that represents 300 independent theatre companies in New York. “It has to be flexible,” says Mori. The theatre is part of a private residential project; the developer received a FAR bonus in exchange for building it. The facility includes a flexible black box space with room for 87 spectators and a warehouse-style space seating up to 149 people. With many different companies sharing the space, Mori opted for a low-key, utilitarian approach. With a growing portfolio and some intriguing projects on the horizon, Mori is excited about the future. It turns out that being pig-headed has its benefits. ●