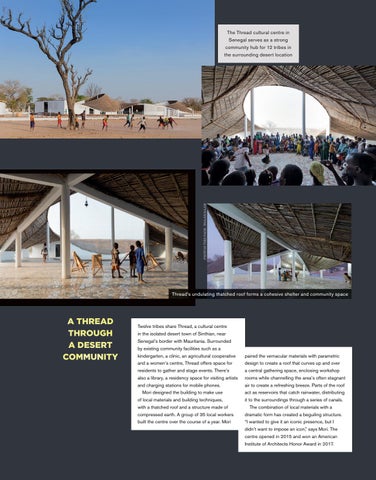 Twelve tribes share Thread, a cultural centre in the isolated desert town of Sinthian, near Senegal’s border with Mauritania. Surrounded by existing community facilities such as a kindergarten, a clinic, an agricultural cooperative

paired the vernacular materials with parametric

and a women’s centre, Thread offers space for

design to create a roof that curves up and over

also a library, a residency space for visiting artists

and charging stations for mobile phones.

air to create a refreshing breeze. Parts of the roof

Mori designed the building to make use of local materials and building techniques, with a thatched roof and a structure made of

act as reservoirs that catch rainwater, distributing it to the surroundings through a series of canals. The combination of local materials with a

built the centre over the course of a year. Mori

“I wanted to give it an iconic presence, but I didn’t want to impose an icon,” says Mori. The centre opened in 2015 and won an American Institute of Architects Honor Award in 2017.