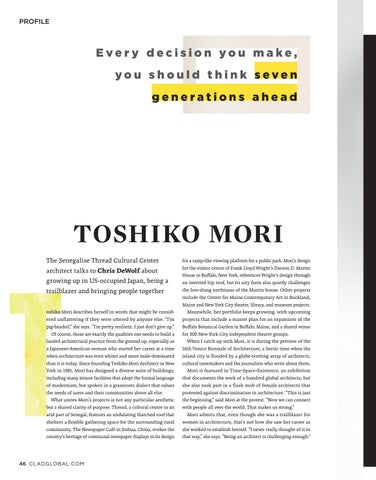 Every decision you make, you should think seven generations ahead

TOSHIKO MORI The Senegalise Thread Cultural Center architect talks to Chris DeWolf about growing up in US-occupied Japan, being a trailblazer and bringing people together oshiko Mori describes herself in words that might be considered unflattering if they were uttered by anyone else. “I’m pig-headed,” she says. “I’m pretty resilient. I just don’t give up.” Of course, those are exactly the qualities one needs to build a lauded architectural practice from the ground up, especially as a Japanese-American woman who started her career at a time when architecture was even whiter and more male-dominated than it is today. Since founding Toshiko Mori Architect in New York in 1981, Mori has designed a diverse suite of buildings, including many leisure facilities that adopt the formal language of modernism, but spoken in a grassroots dialect that values the needs of users and their communities above all else. What unites Mori’s projects is not any particular aesthetic but a shared clarity of purpose. Thread, a cultural centre in an arid part of Senegal, features an undulating thatched roof that shelters a flexible gathering space for the surrounding rural community. The Newspaper Café in Jinhua, China, evokes the country’s heritage of communal newspaper displays in its design

for a ramp-like viewing platform for a public park. Mori’s design for the visitor centre of Frank Lloyd Wright’s Darwin D. Martin House in Buffalo, New York, references Wright’s design through an inverted hip roof, but its airy form also quietly challenges the low-slung earthiness of the Martin house. Other projects include the Center for Maine Contemporary Art in Rockland, Maine and New York City theatre, library, and museum projects. Meanwhile, her portfolio keeps growing, with upcoming projects that include a master plan for an expansion of the Buffalo Botanical Garden in Buffalo, Maine, and a shared venue for 300 New York City independent theatre groups. When I catch up with Mori, it is during the preview of the 16th Venice Biennale of Architecture, a hectic time when the island city is flooded by a globe-trotting array of architects, cultural tastemakers and the journalists who write about them. Mori is featured in Time-Space-Existence, an exhibition that documents the work of a hundred global architects, but she also took part in a flash mob of female architects that protested against discrimination in architecture. “This is just the beginning,” said Mori at the protest. “Now we can connect with people all over the world. That makes us strong.” Mori admits that, even though she was a trailblazer for women in architecture, that’s not how she saw her career as she worked to establish herself. “I never really thought of it in that way,” she says. “Being an architect is challenging enough.”