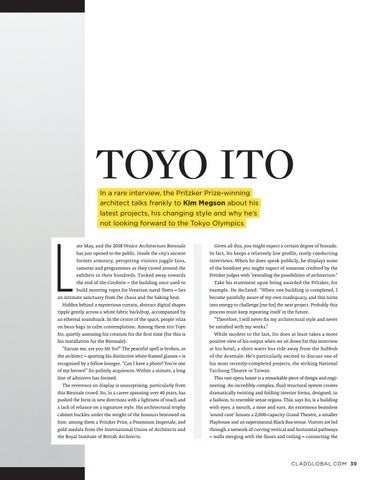 TOYO ITO In a rare interview, the Pritzker Prize-winning architect talks frankly to Kim Megson about his latest projects, his changing style and why he’s not looking forward to the Tokyo Olympics

ate May, and the 2018 Venice Architecture Biennale has just opened to the public. Inside the city’s ancient former armoury, perspiring visitors juggle fans, cameras and programmes as they crowd around the exhibits in their hundreds. Tucked away towards the end of the Corderie – the building once used to build mooring ropes for Venetian naval fleets – lies an intimate sanctuary from the chaos and the baking heat. Hidden behind a mysterious curtain, abstract digital shapes ripple gently across a white fabric backdrop, accompanied by an ethereal soundtrack. In the centre of the space, people relax on bean bags in calm contemplation. Among them sits Toyo Ito, quietly assessing his creation for the first time (for this is his installation for the Biennale). “Excuse me, are you Mr Ito?” The peaceful spell is broken, as the architect – sporting his distinctive white-framed glasses – is recognised by a fellow lounger. “Can I have a photo? You’re one of my heroes!” Ito politely acquiesces. Within a minute, a long line of admirers has formed. The reverence on display is unsurprising, particularly from this Biennale crowd. Ito, in a career spanning over 40 years, has pushed the form in new directions with a lightness of touch and a lack of reliance on a signature style. His architectural trophy cabinet buckles under the weight of the honours bestowed on him: among them a Pritzker Prize, a Praemium Imperiale, and gold medals from the International Union of Architects and the Royal Institute of British Architects.

Given all this, you might expect a certain degree of bravado. In fact, Ito keeps a relatively low profile, rarely conducting interviews. When he does speak publicly, he displays none of the bombast you might expect of someone credited by the Pritzker judges with “extending the possibilities of architecture.” Take his statement upon being awarded the Pritzker, for example. He declared: “When one building is completed, I become painfully aware of my own inadequacy, and this turns into energy to challenge [me for] the next project. Probably this process must keep repeating itself in the future. “Therefore, I will never fix my architectural style and never be satisfied with my works.” While modest to the last, Ito does at least takes a more positive view of his output when we sit down for this interview at his hotel, a short water bus ride away from the hubbub of the Arsenale. He’s particularly excited to discuss one of his most recently-completed projects, the striking National Taichung Theatre in Taiwan. This vast opera house is a remarkable piece of design and engineering. An incredibly complex, fluid structural system creates dramatically twisting and folding interior forms, designed, in a fashion, to resemble sense organs. This, says Ito, is a building with eyes, a mouth, a nose and ears. An enormous beamless ‘sound cave’ houses a 2,000-capacity Grand Theatre, a smaller Playhouse and an experimental Black Box venue. Visitors are led through a network of curving vertical and horizontal pathways – walls merging with the floors and ceiling – connecting the