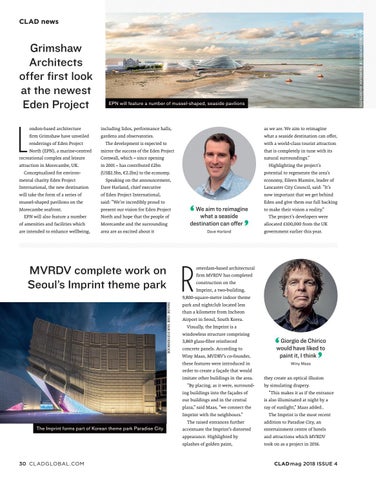 EPN will feature a number of mussel-shaped, seaside pavilions

as we are. We aim to reimagine

what a seaside destination can offer,

with a world-class tourist attraction

that is completely in tune with its

Cornwall, which – since opening

Highlighting the project’s potential to regenerate the area’s

Speaking on the announcement,

will take the form of a series of

now important that we get behind

present our vision for Eden Project

EPN will also feature a number

North and hope that the people of

of amenities and facilities which

Morecambe and the surrounding

are intended to enhance wellbeing,

area are as excited about it

Eden and give them our full backing to make their vision a reality.” The project’s developers were allocated £100,000 from the UK government earlier this year.

otterdam-based architectural firm MVRDV has completed construction on the Imprint, a two-building,

park and nightclub located less than a kilometre from Incheon Airport in Seoul, South Korea. Visually, the Imprint is a windowless structure comprising

Giorgio de Chirico would have liked to paint it, I think

these features were introduced in

3,869 glass-fibre reinforced concrete panels. According to

order to create a façade that would imitate other buildings in the area. “By placing, as it were, surrounding buildings into the façades of

plaza,” said Maas, “we connect the

our buildings and in the central Imprint with the neighbours.” The Imprint forms part of Korean theme park Paradise City

they create an optical illusion

The Imprint is the most recent addition to Paradise City, an

and attractions which MVRDV