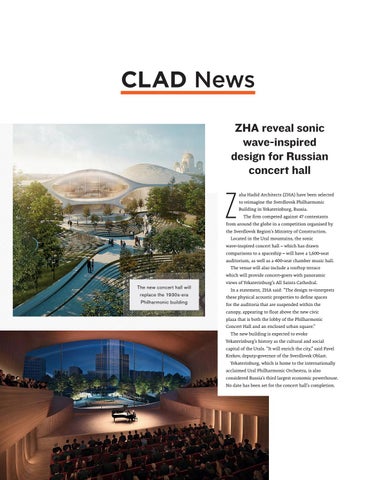 aha Hadid Architects (ZHA) have been selected to reimagine the Sverdlovsk Philharmonic Building in Yekaterinburg, Russia. The firm competed against 47 contestants

from around the globe in a competition organised by the Sverdlovsk Region’s Ministry of Construction. Located in the Ural mountains, the sonic

wave-inspired concert hall – which has drawn comparisons to a spaceship – will have a 1,600-seat auditorium, as well as a 400-seat chamber music hall. The venue will also include a rooftop terrace which will provide concert-goers with panoramic The new concert hall will replace the 1930s-era Philharmonic building

views of Yekaterinburg’s All Saints Cathedral. In a statement, ZHA said: “The design re-interprets these physical acoustic properties to define spaces for the auditoria that are suspended within the canopy, appearing to float above the new civic plaza that is both the lobby of the Philharmonic Concert Hall and an enclosed urban square.” The new building is expected to evoke Yekaterinburg’s history as the cultural and social capital of the Urals. “It will enrich the city,” said Pavel Krekov, deputy-governor of the Sverdlovsk Oblast. Yekaterinburg, which is home to the internationally acclaimed Ural Philharmonic Orchestra, is also considered Russia’s third largest economic powerhouse. No date has been set for the concert hall’s completion.