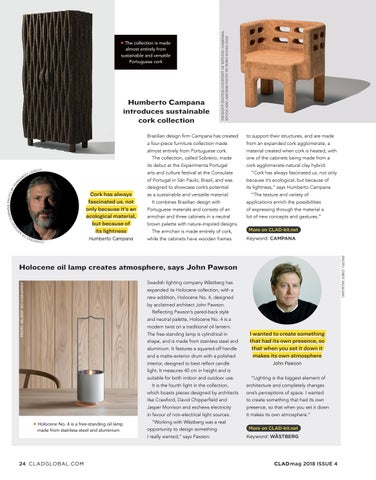 to support their structures, and are made

a four-piece furniture collection made

from an expanded cork agglomerate, a

material created when cork is heated, with

The collection, called Sobreiro, made its debut at the Experimenta Portugal

arts and culture festival at the Consulate

Cork has always fascinated us, not only because it’s an ecological material, but because of its lightness Humberto Campana

one of the cabinets being made from a cork agglomerate-natural clay hybrid. “Cork has always fascinated us, not only

of Portugal in Sãn Paulo, Brazil, and was

because it’s ecological, but because of

as a sustainable and versatile material. It combines Brazilian design with

“The texture and variety of applications enrich the possibilities

Portuguese materials and consists of an

of expressing through the material a

armchair and three cabinets in a neutral

lot of new concepts and gestures.”

brown palette with nature-inspired designs. The armchair is made entirely of cork, while the cabinets have wooden frames

Swedish lighting company Wästberg has expanded its Holocene collection, with a new addition, Holocene No. 4, designed by acclaimed architect John Pawson. Reﬂecting Pawson’s pared-back style and neutral palette, Holocene No. 4 is a modern twist on a traditional oil lantern. The free-standing lamp is cylindrical in shape, and is made from stainless steel and aluminium. It features a squared-off handle and a matte-exterior drum with a polished interior, designed to best reﬂect candle

I wanted to create something that had its own presence, so that when you set it down it makes its own atmosphere John Pawson

light. It measures 40 cm in height and is suitable for both indoor and outdoor use. It is the fourth light in the collection,

Holocene No. 4 is a free-standing oil lamp made from stainless steel and aluminium

which boasts pieces designed by architects

one’s perceptions of space. I wanted

to create something that had its own

presence, so that when you set it down

in favour of non-electrical light sources.

it makes its own atmosphere.”

“Working with Wästberg was a real opportunity to design something I really wanted,” says Pawson.

“Lighting is the biggest element of architecture and completely changes