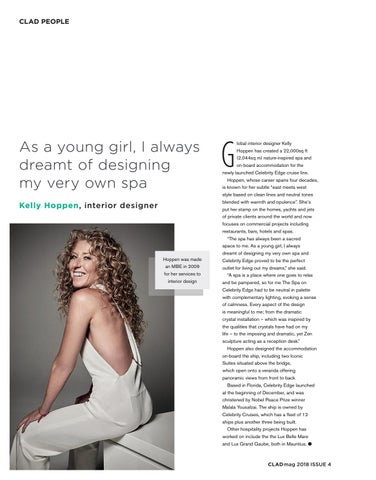 As a young girl, I always dreamt of designing my very own spa

is known for her subtle “east meets west style based on clean lines and neutral tones blended with warmth and opulence”. She’s

put her stamp on the homes, yachts and jets of private clients around the world and now focuses on commercial projects including restaurants, bars, hotels and spas. “The spa has always been a sacred space to me. As a young girl, I always dreamt of designing my very own spa and Hoppen was made

Celebrity Edge proved to be the perfect

outlet for living out my dreams,” she said.

for her services to interior design

“A spa is a place where one goes to relax and be pampered, so for me The Spa on Celebrity Edge had to be neutral in palette with complementary lighting, evoking a sense of calmness. Every aspect of the design is meaningful to me; from the dramatic crystal installation – which was inspired by the qualities that crystals have had on my life – to the imposing and dramatic, yet Zen sculpture acting as a reception desk.” Hoppen also designed the accommodation on-board the ship, including two Iconic Suites situated above the bridge, which open onto a veranda offering panoramic views from front to back Based in Florida, Celebrity Edge launched at the beginning of December, and was christened by Nobel Peace Prize winner Malala Yousafzai. The ship is owned by Celebrity Cruises, which has a fleet of 12 ships plus another three being built. Other hospitality projects Hoppen has worked on include the the Lux Belle Mare and Lux Grand Gaube, both in Mauritius. ●