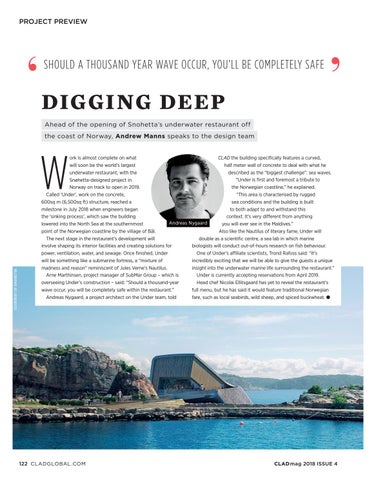 SHOULD A THOUSAND YEAR WAVE OCCUR, YOU’LL BE COMPLETELY SAFE

DIGGING DEEP Ahead of the opening of Snohetta’s underwater restaurant off the coast of Norway, Andrew Manns speaks to the design team

CLAD the building specifically features a curved, ork is almost complete on what half meter wall of concrete to deal with what he will soon be the world’s largest described as the “biggest challenge”: sea waves. underwater restaurant, with the “Under is first and foremost a tribute to Snøhetta-designed project in the Norwegian coastline,” he explained. Norway on track to open in 2019. “This area is characterised by rugged Called ‘Under’, work on the concrete, sea conditions and the building is built 600sq m (6,500sq ft) structure, reached a to both adapt to and withstand this milestone in July 2018 when engineers began context. It’s very different from anything the ‘sinking process’, which saw the building Andreas Nygaard you will ever see in the Maldives.” lowered into the North Sea at the southernmost Also like the Nautilus of literary fame, Under will point of the Norwegian coastline by the village of Bål. double as a scientific centre, a sea lab in which marine The next stage in the restaurant’s development will biologists will conduct out-of-hours research on fish behaviour. involve shaping its interior facilities and creating solutions for One of Under’s affiliate scientists, Trond Rafoss said: “It’s power, ventilation, water, and sewage. Once finished, Under incredibly exciting that we will be able to give the guests a unique will be something like a submarine fortress, a “mixture of insight into the underwater marine life surrounding the restaurant.” madness and reason” reminiscent of Jules Verne’s Nautilus. Under is currently accepting reservations from April 2019. Arne Marthinsen, project manager of SubMar Group – which is Head chef Nicolai Ellitsgaard has yet to reveal the restaurant’s overseeing Under’s construction – said: “Should a thousand-year full menu, but he has said it would feature traditional Norwegian wave occur, you will be completely safe within the restaurant.” fare, such as local seabirds, wild sheep, and spiced buckwheat. l Andreas Nygaard, a project architect on the Under team, told