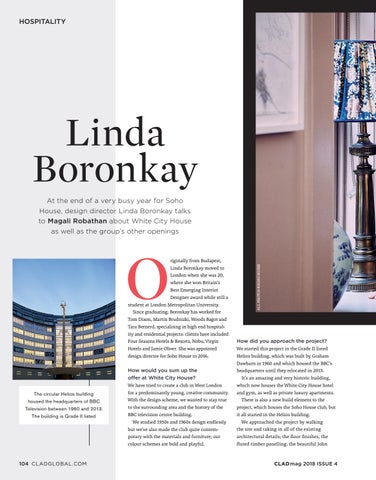 The circular Helios building housed the headquarters of BBC Television between 1960 and 2013. The building is Grade II listed

How would you sum up the offer at White City House? We have tried to create a club in West London for a predominantly young, creative community. With the design scheme, we wanted to stay true to the surrounding area and the history of the BBC television centre building. We studied 1950s and 1960s design endlessly but we’ve also made the club quite contemporary with the materials and furniture; our colour schemes are bold and playful.

At the end of a very busy year for Soho House, design director Linda Boronkay talks to Magali Robathan about White City House as well as the group’s other openings

How did you approach the project? We started this project in the Grade II listed Helios building, which was built by Graham Dawbarn in 1960 and which housed the BBC’s headquarters until they relocated in 2013. It’s an amazing and very historic building, which now houses the White City House hotel and gym, as well as private luxury apartments. There is also a new build element to the project, which houses the Soho House club, but it all started in the Helios building. We approached the project by walking the site and taking in all of the existing architectural details; the floor finishes, the fluted timber panelling, the beautiful John