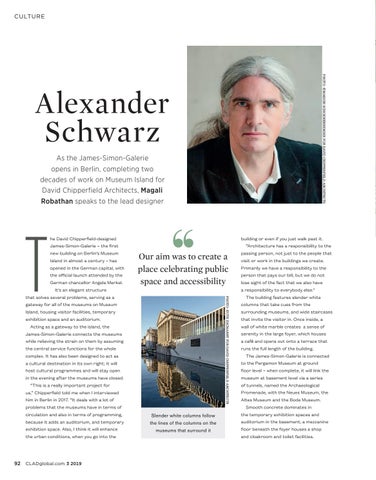 building or even if you just walk past it.

“Architecture has a responsibility to the

James-Simon-Galerie – the first new building on Berlin’s Museum Island in almost a century – has opened in the German capital, with the official launch attended by the German chancellor Angela Merkel.

Our aim was to create a place celebrating public space and accessibility PHOTO: ©UTE ZSCHARNT FOR DAVID CHIPPERFIELD ARCHITECTS

that solves several problems, serving as a gateway for all of the museums on Museum Island, housing visitor facilities, temporary exhibition space and an auditorium. Acting as a gateway to the island, the James-Simon-Galerie connects the museums while relieving the strain on them by assuming the central service functions for the whole complex. It has also been designed to act as a cultural destination in its own right; it will host cultural programmes and will stay open in the evening after the museums have closed. “This is a really important project for us,” Chipperfield told me when I interviewed him in Berlin in 2017. “It deals with a lot of problems that the museums have in terms of circulation and also in terms of programming,

because it adds an auditorium, and temporary

the lines of the columns on the

the urban conditions, when you go into the

exhibition space. Also, I think it will enhance

passing person, not just to the people that

museums that surround it

The building features slender white columns that take cues from the surrounding museums, and wide staircases that invite the visitor in. Once inside, a wall of white marble creates a sense of serenity in the large foyer, which houses a café and opens out onto a terrace that runs the full length of the building. The James-Simon-Galerie is connected to the Pergamon Museum at ground floor level – when complete, it will link the museum at basement level via a series of tunnels, named the Archaeological Promenade, with the Neues Museum, the Altes Museum and the Bode Museum. Smooth concrete dominates in the temporary exhibition spaces and auditorium in the basement; a mezzanine floor beneath the foyer houses a shop and cloakroom and toilet facilities.