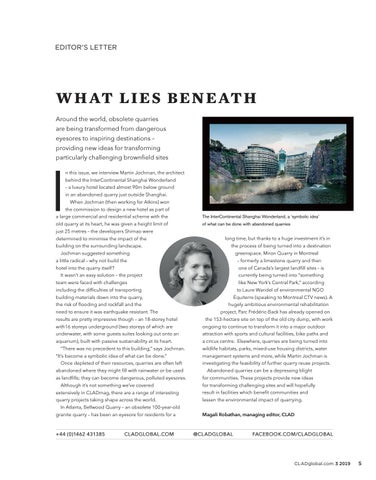 are being transformed from dangerous eyesores to inspiring destinations –

particularly challenging brownﬁeld sites n this issue, we interview Martin Jochman, the architect behind the InterContinental Shanghai Wonderland – a luxury hotel located almost 90m below ground in an abandoned quarry just outside Shanghai.

When Jochman (then working for Atkins) won

the commission to design a new hotel as part of

a large commercial and residential scheme with the

old quarry at its heart, he was given a height limit of just 25 metres – the developers Shimao were determined to minimise the impact of the building on the surrounding landscape. Jochman suggested something

The InterContinental Shanghai Wonderland, a ‘symbolic idea’ of what can be done with abandoned quarries

long time, but thanks to a huge investment it’s in

the process of being turned into a destination greenspace. Miron Quarry in Montreal

– formerly a limestone quarry and then

a little radical – why not build the

one of Canada’s largest landﬁll sites – is

hotel into the quarry itself?

currently being turned into “something

It wasn’t an easy solution – the project

team were faced with challenges

to Laure Waridel of environmental NGO

including the difﬁculties of transporting

building materials down into the quarry, the risk of ﬂooding and rockfall and the

need to ensure it was earthquake resistant. The

results are pretty impressive though – an 18-storey hotel

the 153-hectare site on top of the old city dump, with work

with16 storeys underground (two storeys of which are

ongoing to continue to transform it into a major outdoor

aquarium), built with passive sustainability at its heart.

a circus centre. Elsewhere, quarries are being turned into

underwater, with some guests suites looking out onto an “There was no precedent to this building,” says Jochman.

“It’s become a symbolic idea of what can be done.”

Once depleted of their resources, quarries are often left

abandoned where they might ﬁll with rainwater or be used

management systems and more, while Martin Jochman is

investigating the feasibility of further quarry reuse projects. Abandoned quarries can be a depressing blight

as landﬁlls; they can become dangerous, polluted eyesores.

extensively in CLADmag, there are a range of interesting

result in facilities which beneﬁt communities and

Although it’s not something we’ve covered

granite quarry – has been an eyesore for residents for a