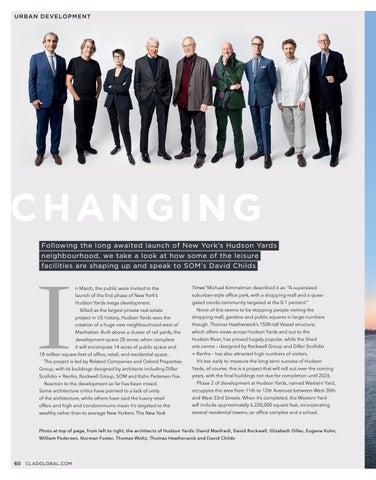 CHANGING Following the long awaited launch of New York’s Hudson Yards neighbourhood, we take a look at how some of the leisure facilities are shaping up and speak to SOM’s David Childs

n March, the public were invited to the

Times’ Michael Kimmelman described it as: “A supersized

project in US history, Hudson Yards sees the

Manhattan. Built above a cluster of rail yards, the

which offers views across Hudson Yards and out to the

it will encompass 14 acres of public space and

launch of the first phase of New York’s

suburban-style office park, with a shopping mall and a quasiNone of this seems to be stopping people visiting the

creation of a huge new neighbourhood west of

Hudson River, has proved hugely popular, while the Shed

Group, with its buildings designed by architects including Diller

Yards, of course; this is a project that will roll out over the coming

The project is led by Related Companies and Oxford Properties

years, with the final buildings not due for completion until 2026.

Some architecture critics have pointed to a lack of unity

occupyies the area from 11th to 12th Avenues between West 30th

offers and high end condominiums mean it’s targeted to the

will include approximately 6,220,000 square feet, incorporating

Reaction to the development so far has been mixed.

of the architecture, while others have said the luxury retail

and West 33rd Streets. When it’s completed, the Western Yard

wealthy rather than to average New Yorkers. The New York

several residential towers, an office complex and a school.