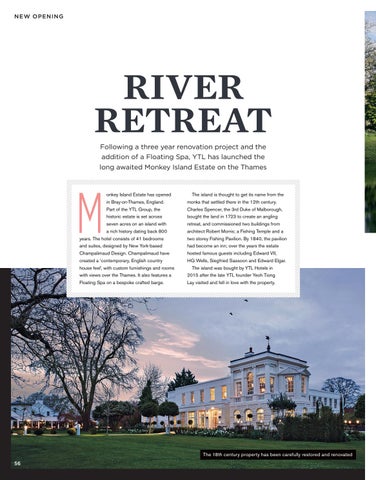 RIVER RETREAT Following a three year renovation project and the addition of a Floating Spa, YTL has launched the long awaited Monkey Island Estate on the Thames

The island is thought to get its name from the

monks that settled there in the 12th century.

Part of the YTL Group, the

historic estate is set across

bought the land in 1723 to create an angling

seven acres on an island with

retreat, and commissioned two buildings from

a rich history dating back 800

architect Robert Morris; a Fishing Temple and a

years. The hotel consists of 41 bedrooms

and suites, designed by New York-based

had become an inn; over the years the estate

The island was bought by YTL Hotels in

with views over the Thames. It also features a

Lay visited and fell in love with the property.

The 18th century property has been carefully restored and renovated